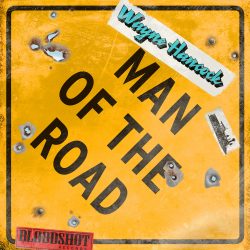 “Got to make it day to night in El Paso / I’m going there as fast as I can go / I’ll take the road anyday / ‘Cause that’s the kind of life I’ve made / I’m drivin’ my young life away,” sings Wayne Hancock on the opening lines of this newly curated collection of his output from more than 20 years past. While the young part may not apply to the 54-year-old Hancock these days, the notion of him being road-weary does as he continues to hit the road “200 days a year”.

Indeed, the record’s title reflects a lot of what we hear in this selection of songs: tales of a working musician who hasn’t lost his love for playing shows and going town-to-town. The song ‘Man of the Road’ is an ode to touring life: “Well I’m a man of the road and the highway is my home / Coast to coast there ain’t a route that I ain’t drove.” ‘Tulsa’, with its big band swing, is so joyfully celebratory it could serve as an advert for the tourist board: “Playin’ lots of joints around / But Tulsa is my favourite town.” ‘Thunderstorm and Neon Signs’ (originally on Hancock’s 1995 debut album of the same name) is yet another love letter to touring life: “I’ve been driving all day / And I sure could use some rest / There’s a motel up ahead where I can unwind / ‘Cause I sure love thunderstorms and neon signs.”

There are songs here that look at the more difficult side of life on the road too; on ‘Life’s Lonesome Road’ he laments the difficulty a transient existence has on relationships: “I don’t want to hear you cry / So I’ll just tell you goodbye / I’m back home on life’s lonesome road.” ‘A-Town Blues’ has a similar tone: “Don’t go cryin’ for me darlin’ / You know this is what I gotta do / But I know I’ll be back before you know it.”

‘Your Love and His Blood’ stands out amongst the other songs subject wise – the only murder ballad included in the collection – it’s bright tune belying it’s dark lyrical content: “He got drunk and tried to start a fight / I pulled my pistol from my pocket / And then I wrecked his plans / I’ve got your love and his blood on my hands.”

Vocally, Hancock is a ringer for Hank Williams, his characteristic nasal tone – as traditional as it might be – cutting through in a crisp and refreshing way. (Hancock even pays tribute to Williams and his influence in ‘Shootin’ Star from Texas’: “Well Lefty and Hank Williams / Lord they sure could sing / And I wore the needle off my phonograph.”) The music calls back an earlier time too, with a mix of western swing, big band and honky-tonk. As classic as these elements are, the irresistible catchiness of every song would be enough to turn the heads of more modern country-genre fans.

The album closes with the only previously unreleased track ‘Let’s Have a Party’. “Some people like to rock / Some people like to roll / The movin’ and a groovin’ gonna satisfy my soul,” Hancock warbles truthfully, having no plans to slow down (saying recently that his goal is to “never to retire”) and the energy and passion in this collection proves that this party is far from over.