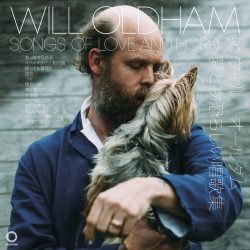 Will Oldham is one of a kind. Sure, the tools of his trade and how he uses them are as old as the hills, but there’s something startlingly original about this master craftsmen. Some of his songs have been released under the ‘Palace’ moniker, some with ‘Bonnie’ in the title, but there’s always a piece of himself left behind when the needle stops turning.

‘Songs Of Love And Horror’, then, is the album his biggest fans have been waiting for. This is Will Oldham unplugged and unconcerned with cool or irony – twelve of his best songs, whispered in your ear, as a guitar plays along. It’s stark and beautiful in places, full-on scary in others, but always with an aim that’s true. Released as a companion piece to accompany a book of Oldham’s lyrics, ‘Songs Of Love And Horror’ is a piece of work that deserves to stand alone, too.

Songs like ‘The Glory Goes,’ ‘Ohio River Boat Song’ and the gorgeous ‘Only Someone Running’ (“can you love the one that God does?”) thrive in solitary confinement and, as the record rolls on as gently as a summer sea breeze, it dawns on you that this is perhaps Oldham’s definitive statement.

Yes, ‘I See A Darkness’ is present and correct… and nearly steals the show. But there’s always been more to Oldham than his most well-known song. This is the record that finally proves it.

Stark, solitary and startling takes on an underrated catalogue