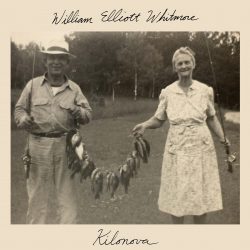 William Elliott Whitmore has spent the entirety of his 40 years on this planet living on the family farm in Iowa. As a singer-songwriter heavily influenced by the hardcore punk scene of that community, he has, on his six albums to date, fused this influence with a mix of blues, country and folk. For album number seven Whitmore has put the writing on hold in favour of celebrating some of the musical heroes who have inspired his career thus far.

The result is ‘Kilonova’, a collection of ten covers from an eclectic bunch of artists spanning 90+ years of American music. Whitmore brings his talents with a banjo to a number of these songs so it is ironic that on the 1920s Dock Boggs classic ‘Country Blues’ he has opted for an A cappella version and omitted the instrument for which Boggs was famous.

That approach to a classic piece of American music, a reinvention of, rather than a regurgitation of the song, typifies much of what Whitmore has brought to this album. For every ‘Ain’t No Sunshine’ a pretty faithful if pared back version of the Bill Wither’s hit, there is a ‘Fear of Trains’, an acoustic reinvention of The Magnetic Fields song from 1994. That particular song features some bleak and thought-provoking lyrics about historical disasters linked to the coming of the railroad to the west and Whitmore’s delivery allows those lyrics to be the heart and soul of the song in a way that The Field’s more up tempo and commercial sounding offering couldn’t.

And so, the die is cast. A hugely varied collection, Harlon Howard’s ‘Busted’ updated with a swampy, bluesy feel. ZZ Top’s ‘Hot, Blue and Righteous’ given a gospel sound by a gorgeous female backing and a unique and memorable twist by a short trumpet intervention.  Bad Religion’s ‘Don’t Pray On Me’, a frenetic punk song transformed into a solo with just a banjo accompaniment and, on ‘Bat Chain Puller’ Whitmore has produced a version that is every bit as erratic and demented as Captain Beefheart’s original.

That grungy sounding track aside, this is, in the main, a fairly easy listen with Whitmore focusing on bringing his raspy baritone and a guitar or banjo accompaniment to breathe new life into old and, in some cases, very old songs. Albums full of cover versions divide opinion, they clearly aren’t to everyone’s liking. However, when an artist can bring enough in the way of originality to the songs, particularly songs that may not register as overly familiar, then that album has to be worthy of a listen.

Eclectic mix of covers given a unique reinvention