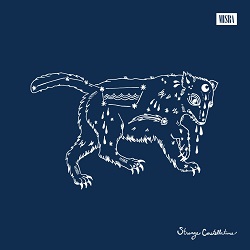 It’s rare to hear a debut album as accomplished as Strange Constellations – but then William Matheny isn’t exactly a completely fresh face on the music scene as he’s had a number of years in the Athens (Ohio) based Indy-folk band Southeast Engine. On his debut solo release William Matheny unarguably demonstrates that he’s honed his songwriting skills and musical chops along the way. Strange Constellations see’s Matheny approaching his thirties and looking back on his adult life so far – and it’s fair to say that he’s not too impressed with what he observes. Maybe he’s being hard on himself, who knows? Whatever the case these are songs that ring true – rueful, and tuneful. Opener Teenage Bones sets one such rueful scene to a roots-rock feel “I used to walk to your house in the summertime / let the car wash spray get me wet / and leave my shoes by the door / and sit all day on your floor / and say things I’d one day regret”. There’s more, and worse confessions to come. 29 Candles is the shameful a blurting out of being an untrustworthy manipulator of feelings “I could tell you I’m sorry but you know that I’m not / And I could say that I’m grateful for everything that we’ve got / I can promise to change but you know that I can’t” Metheny sings with passion before kissing off with “just like 29 candles burning on a cake aren’t enough to make me a man”. It’s a fuzzed up full-on rock song that shakes the album up at just the right point.

Matheny’s album strays across a variety of styles, Out for Revenge is an angry loping rock and roller, somewhat reminiscent of Justin Townes Earle, which fizzles with resentment against an unfaithful lover. In complete contrast My Grandfather knew Stoney Cooper has a soft and gentle interplay of slow piano and guitar, whilst Matheny’s lyrics intertwines the lives of the country star, various branches of Matheny’s family tree and finds space to pull in Jesus. With mournful horns it travels a winding trail of life’s disappointments and familial disputes. There’s a touch of Tom Petty hanging around Blood Moon Singer‘s tale of unrequited love, whilst Funny Papers throws a long line back to classic honky-tonking tunes with it’s knowing lyrics shaped by a hard cutting wit. The lyrics are bitterly funny but underneath this there is also a painful honesty “We don’t love each other enough to ever be happy / but we don’t hate each other enough to ever leave / And I’ve always been too selfish to satisfy you / but I’ve never been smart enough to deceive”. If you’re thinking Gram Parsons singing Hank Williams then you are in the right ball park, and swinging that bat.

In all Strange Constellations is that rare thing – a really memorable first solo album. In many ways Strange Constellations is somewhat like Steve Forbert’s Alive on Arrival in its impact – a fully formed, honest and believable album littered with musical surprises and with lyrics that cut through the everyday stories they tell and, mostly, feel that they come from William Matheny’s true feelings and experiences. Definitely an artist that should be heard, and it’s to be fervently hoped that this isn’t a one-off side project.