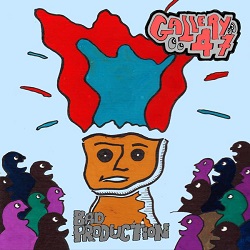 Housed in a rather lovely (if slightly fiddly) blue box which begs you to slide it open and reveal the bounteous contents (the promo copy we received contained stickers, pins and a CD), the obvious and deliberate peculiarity of this release DOES NOT smack of Loughborough. Of course, it may be a scathingly unfair assumption to make, but Loughborough doesn’t seem like the natural home of gentle, finger-picked, half-whispered Americana. Still… you live and learn.

Opening with a Dylan-esque study in social commentary, aptly entitled Lefty, which details many of the things that are wrong with our society (notably that we are even in a position where we have to legislate for a minimum wage… madness), is one of a couple of tracks which fall into similar, bluesy, observational, stream of consciousness territory, but the record has much more to offer besides. Indeed, the number of intricate, sparely arranged songs that pepper the album bring into sharp focus Jack Peachey’s talent for writing arrestingly beautiful, ethereal folk songs. A Candy Smile and Himalaya, If Anything Should Happen and Little Baby Luke are simply astoundingly beautiful, sounding a little like strange Beach Boys outtakes from Smile – pure Laurel Canyon.

There are moments that meander and call into question some of the artistic decision-making that goes on late at night in dimly lit rooms (for example the over-indulgent use of echo on Leaner which is otherwise captivating and should, regardless, be held in the highest esteem on account of the fact that it must be one of the few songs on earth to celebrate the cultural significance of the ‘lollipop lady’).

If you miss Sparklehorse’s more subdued moments, enjoy Devendra Banhart’s more normal moments or are just in search of a record that speaks rather than shouts, look no further.

Loughborough, you gave us the Grand Central Railway and now this record. We thank you!