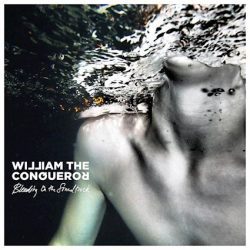 Opening with the hugely anthemic and frankly Coldplayesque ‘Path of the Crow’ William the Conqueror, the band project driven by singer-songwriter Raurri Joseph, seem to be making their bid for the big time in a very grand fashion. It’s open sky music with squealing guitars and a huge peeling melody line. However, this is a false dawn as the listener is immediately wrong-footed by ‘Thank Me Later’ a funky, jazzy walking narrative with half spoke/sung lyricism. It reminds of Paul Simon or Lou Reed but it is neither as it builds and builds.

This album is the second in an autobiographical narrative following last year’s well-received ‘Proud Disturber of the Peace’ and deals with Joseph’s adolescence and early adulthood.

Next up, ‘Madness on the Line’ is a stomping blues featuring Stonesy guitar and wailing harp counterpointed by the following track, the beguiling ‘The Burden,’ softly delivering a powerful lyric couched in a feather-light yet insistent musical delivery. Veteran producer Ethan Johns has coloured each track with a distinctive sound, bringing Joseph’s vocals front and centre but allowing production splashes of harmonies or piano to add great depth. The aforementioned ‘The Burden’ becomes a powerful song with repeated listens as it reveals its depths both musically and lyrically. Gorgeous.

The title track is in a similar walking bluesy vein to ‘Thank Me Later’ which builds in urgency as Joseph shouts out his feelings. Other highlights are the sumptuous ‘The Curse of Friends’ with its doleful melancholy and aching lyric illuminated by a beautiful melody and slippery guitar lines and again Joseph’s evocative and affecting voice. The album closer ‘Within Your Spell’ has a winsome quality and some great production as it lilts and sways and Joseph holds the tune and heads towards its swooning, repeated chorus.

This is a cracking album – full of styles and sensibilities that highlights a real talent that is maturing fast – both musically and lyrically. As a unit they sound utterly on song and should present a fantastic live proposition.

Highly recommended – Loose have a(nother) major artist in their stable!

0 thoughts on “William the Conqueror “Bleeding on the Soundtrack” (Loose, 2019)”