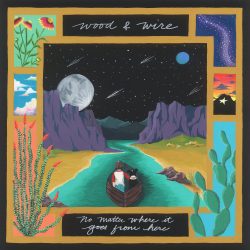 ‘No Matter Where It Goes From Here’ validates the rocket-ship rise of Wood & Wire in the bluegrass world, who in their short time together have already garnered a Grammy nomination for Bluegrass Album of the Year with their last album ‘North of Despair’ and received much attention for their powerhouse songwriting and unmatched picking skills.  ‘No Matter Where It Goes From Here’ will do nothing to dissuade those perceptions of the band and only serve to further enhance its reputation.  In fact the album will help the band reach across the aisles of bluegrass and touch those who sometimes are put off by the bluegrass label.

‘No Matter Where It Goes From Here’ is a powerfully-crafted album that is built upon the band’s stellar songwriting.  Despite that Grammy nomination for Best Bluegrass Album, the bluegrass label is something the band has long struggled with.  They have often felt wrongly pegged as such simply due to their all-acoustic lineup of guitar, bass, banjo, and mandolin.  Yes, they have moments that make one feel like they are listening to a traditional, suited-up band at MerleFest, but Wood & Wire is so much more than that, and their latest album helps expand that notion.

‘No Matter Where it Goes From Here’ can deliver songs like ‘Paddlewheel’, ‘Pigs’, and a cover of Peter Rowan’s ‘Roadie Circles’ that easily seem at home among the most traditional bluegrass, but more often than not they deliver songs that speak with a wider musical voice.  Those songs such as ‘Spirit of ‘94’, ‘John’, and ‘My Hometown’, seem to better represent the varied musical styles of their hometown of Austin, Texas, and showcase the band’s stated roots and musical interests like the Grateful Dead, Bela Fleck, the Punch Brothers, and the legendary Col. Bruce Hampton – the godfather of the weird.

Wood & Wire is a progressive-thinking band with bluegrass roots and an Americana soul.  ‘No Matter Where it Goes From Here’ represents the adventurous cross-pollination of their music and is another step forward for the insanely talented band.

Progressive-thinking band with bluegrass roots and an Americana soul