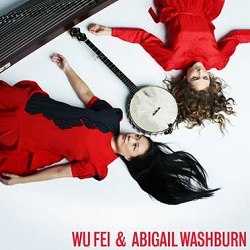 Abagail Washburn doesn’t leave all the banjo experimentation to her husband Bela Fleck, who has produced this new album. Where Bela has been looking across the Atlantic to the banjo’s origins in Africa, Abigail Washburn has explored, in the company of longtime friend and musical collaborate Wu Fei, a Pacific looking path for the banjo which links up Appalachian clawhammer with the Chinese guzheng. One could lazily classify this as a “world music” experiment, which is a rather quaint term in as much as it is suggests that there is music available from somewhere other than this world, but really it is an album that shows that two very different instruments – the 5 string glory that is the banjo and the 21 string “harp/zither” that is the guzheng – can make sensational sounds together.

It’s more than just a blending of sympathetic instruments, the album has Abigail Washburn and Wu Fei blending tunes from different traditions, with Washburn effortlessly switching between English and Chinese in her singing. There’s a synchronicity from the start with ‘The Water is Wide‘ sharing a musical stream with ‘Wusuli Boat Song‘, contrasting melodies inspired by being waterborne chiming together in perfect harmony. There’s a similar seemlessness to ‘The Roving Cowboy / Avarguli‘ as Chinese folksong gives way to an epic sun-scorched tale of the American West that has a very modern feel as it is percussively driven along by Wu Fei’s guzheng.  For all the seriousness of the music there’s plenty of space for the…less serious. The sung unaccompanied ‘Who says Women Aren’t as Good as Men‘ is, probably, a tongue-in-cheek conversation across a fence, or something similar – this reviewer admits to a lack of language skills, but the sarcastic tone and “ho-ho“s and “ha-ha“s are something of a universal hint. ‘Banjo Guzheng Pickin’ Girls‘ is a light semi-autobiographical song which explains how this duo first got together – as Abigail Washburn sings of how her banjo has taken her around the world – from North Carolina to China, one can assume that Wu Fei’s singing describes something of the reverse – from China to California.

No-one could accuse this album of lacking “twang“, but it’s maybe not the twang that many know and love. It is, though, excellent twang in its own right – an album such as this could be a worthy but dry example of experimentation – however ‘Wu Fei and Abigail Washburn‘ is an album full of vitality and the sound of new musical groundbreaking.  It’s a perfect musical union – neither artist dominates, both support the other. If you like banjo, then it’s more than worth a listen. And the same if you like guzheng.