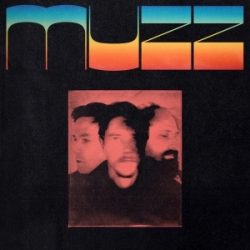 Not just the band’s name, ‘Muzz’ perfectly describes their sound. Fortunately that was the intention according to producer and multi-instrumentalist Josh Kaufman who wanted to describe the texture of the group’s sound without being pinned to a particular genre or time. They chose well. There is a richness to the expansive layers of cosmic and psychedelia that they blend with full-on indie rock in their debut, and for good measure, eponymous album.
Muzz are Kaufman whose work producing War on Drugs is evident here. Paul Banks, frontman and guitarist with New York indie rockers Interpol and drummer Matt Barrick whose time touring with Fleet Foxes both stamp their mark on this collaboration.

To say ‘Bad Feeling’ starts ‘Muzz’ in a laid back vibe is an understatement. Gentle strings with a distant synthesiser shimmering like a heatwave slink into a rousing horn section. That haunting swirl continues into ‘Evergreen’ as War on Drugs and Fleet Foxes flash up. ‘Patchouli’ and ‘Summer Love’ need little description. Despite Kaufman’s aim to create a timeless tone these two are hard to disguise. The folk influence of Kaufman’s Bonny Light Horseman days is evident.

Muzz felt rather overwhelming first time round and “fuzz” might have been a more suitable moniker. There are more indie pyrotechnics than this reviewer can handle but persevere and like the shifting pieces in a kaleidoscope individual colours begin to emerge.