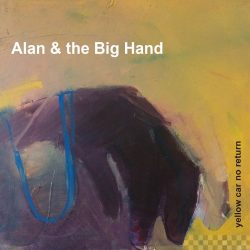 Alan & The Big Hand are described as a folk collective headed by Alan McClure. McClure is a writer and musician based in Galloway, south-west Scotland.  His creative output encompasses oral storytelling, poetry, songs, novels, short stories, audio sketches, singer and chief songwriter with The Razorbills, occasional member of The Wee Folk Storytellers. Oh, and if that wasn’t enough he is also a primary school teacher.

Every now and then McClure takes his poems and songs from his rural base to, err, Hull, where he works with local musicians to translate his words into ‘indie folk, jazz, flamenco, space pop.’ With influences ranging from Leonard Cohen to Blur and The Incredible String Band to the indie-pop of James it is perhaps not surprising that McClure has come up with an eclectic mix of songs on this album.

The opening couple of tracks get straight to the heart of Alan’s folk roots. The opening lines of Where We’re Heading – ‘My heart is in the highlands, my heart is not here entangled in the busy here and now’ has Tom Gaynard playing low whistle alongside McClure’s acoustic guitar and, with a strong Scots accent at its heart, the song is heavy on imagery.

Contrast this with One Way to Go, a jazzy number dominated by the brilliant alto sax of Rob McGrath and the jazz guitar of Dave Gawthorpe. This is such a departure from those initial heavy folk orientated tracks and, indeed, much of what is to follow, that it is automatically elevated to one of the stand out songs on the album. McGrath’s sax reappears on the album closer My Era, a song right out of the Al Stewart clever lyric and word heavy songbook. At 6 minutes long this song, with its great sax fade out, acts a jazzy companion to One Way to Go.

Having impressed with his jazz guitar, Gawthorpe’s work with classical guitar is a feature on another couple of tracks that fit together as companion pieces, Reach and Symbols. His beautiful playing on both tracks is a perfect accompaniment to McClure’s consistently thought provoking lyrics and distinctive vocals.

The initial single from the album I Sat Beside Myself Today, is described by McClure as ‘a groove driven meditation on the creative process’ and is the most up-tempo track on this album of many variations in direction and sound. Those musical shifts mean that all of the songs may not suit all of the people all of the time but there is enough intelligent writing and musical quality here to make this an album worthy of our attention.

Some distinctive sounds in a poetic and eclectic mix of jazzy, indie-folk