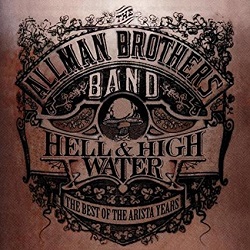 The Arista Years were 1980 and 1981. This was a battered and bruised Allman Brothers Band which had taken casualties along the way – quite literally – and had seen frequent changes of personnel. And the drugs had also taken their toll. The band released just two albums for Arista – Reach for the sky and Brothers of the road – which totalled nineteen tracks between them. This current compilation, issued by Retroworld which is a wing of Floating World Records, includes eleven of these.  Now these albums, in all fairness, are not regarded by many as The Allman Brothers Band’s finest moment – the sound had been slicked up some, and there was some attempt to move the band out of their Southern Rock “ghetto” and into the mainstream rock style of the likes of Styx. Styx!  And there are enough miserable eighties touches to make any condemnation seem deserved – the hit Straight From the Heart is just terrible, bland, middle of the road dum-dum-dum by the book rock balladry. We’re talking Journey levels of forgettable blandness.

However, elsewhere there are some flashes of the old band. The Mystery of the West is an instrumental which doesn’t reach the peaks of Jessica, but features some rather tasty guitar none the less – it’s a little spoilt by the drum solo/keyboards section but nobody’s perfect. Brothers of the Road aspires to being an “on the road / hard trucking / rocking band” anthem – full of “if we don’t lose we’re bound to win” philosophy and self mythologising “we play our music like the storm / they say a brand new sound is born”. It’s not deep, but the guitar is nice and Charlie Daniels’ fiddle livens it up along the way. Leavin’ adds in some funky keyboards – it’s not quite Amigos era Santana but it’s heading that way.  In the end though – and not surprisingly – it’s the songs that don’t stray too far from what one might expect from The Allman Brothers that are the most successful – I got a right to be wrong, for example, which mixes Southern boogie with dashes of slide guitar and bad boy lyrics.

Past their glory days The Allman Brothers Band still have flashes of brilliance on this best of culled from their early 1980s offerings for Arista.