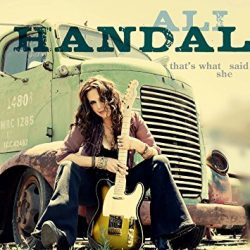 Ali Handal positions her herself as a Sheryl Crow with more sass and sharper guitar skills, and she’s not far short of the mark on the evidence of this album of self-penned tunes (except two – one an Ani DiFranco and the other…. well more of that later). The album kicks off with the template – driving southern funky MOR rock. There is a likeable jauntiness to tracks such as ‘Smoke More Pot’ with its double-tracked vocals, a trick that is also employed to beef up ‘The World Don’t Owe You a Thing’.

And so it goes all Hammond organ, snappy drums , big choruses, sharp vocals and very well produced highway soft rock without a heart. And here’s the problem. There is evident talent here but the game plan appears to be about creating a full package of non-challenging material along with an eminently marketable commodity.

And the second cover – “What is and What Should Never Be” which is a Led Zeppelin standard and should never be covered in such a bland way. This reviewer is all for tackling sacred cows but despite making a good fist of parts of the song the whole does not work.

If you like Sheryl Crow as her PR states you will love Ali Handal. Me, I prefer Lissie but I’ve always been difficult. Give this a listen and make your own mind up. It certainly has some great moments.

MOR fodder from self described ‘badass’ guitarist and singer