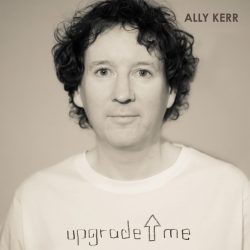 Album number 4 for Scottish folk/pop singer songwriter Ally Kerr. With debut album ‘Calling Out to You’ released back in 2004 Mr Kerr has been around for a while. It was the success of this album in Japan that started the ball rolling in the Far East to the extent that Ally can now look forward to a year of promoting his new work throughout Europe and Asia, including his second headline tour of China.

On ‘Upgrade Me’ Kerr brings a smorgasbord of musical styles to intelligent and insightful lyrics and a wide range of subject matters. There is no overriding theme in play here but there are clear insights into the 21st century psyche with the title track, “everyone’s alive but eyes are not open, our tech is smart yet we’re a little broken, wondering when our upgrade comes” and, on ‘Another Way’, “tapping the screen with increasing desperation, every sharp click brings a slowly sinking feeling, scanning too fast, that’s another brain cell frying”.

These two songs may have clear lyrical links but musically they are polar opposites. Kerr’s softly spoken and restrained vocals border on whispers at times on the album and, if that opening title track showcases this style, then ‘Another Way’ brings electric guitar riffs and growing, soaring orchestration. There are other surprises in store, not least with ‘Campfire’, a nod towards tropical island escapism complete with Hawaiian guitars, steel drums and brass.

Whatever the style, Kerr’s voice is the constant, but those songs that stand above the rest rely heavily on other sources. ‘All We Cannot Say’ stands out for its sublime piano track, the thread around which the song is constructed, and the subtly gorgeous vocals of Katie McArthur and Caroline Evens. ‘Our Town’ tells the story of two like-minded dreamers drifting west towards Hollywood and has lush violin strings growing over another lovely piano intro. ‘Home’ completes a trio of highlights and, again, it is a mix of violin, beautiful female backing vocals and subtle piano and acoustic guitar that bring this gentle track to life.

The wide range of targets for Kerr’s writing and the inclusion of some musical surprises are to be applauded but it is those quieter, more reflective and melancholy songs that stand out and are the ones demanding the ‘Repeat’ button.