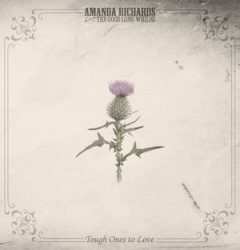 Sometimes a record comes along and completely blows you away. Amanda Richards won’t be unfamiliar with this concept having been Grammy-nominated as an independent artist, but ‘’Tough Ones To Love’’ is very much in this category, with the songwriting and vocals being absolutely in-sync, alongside the musicality of Amanda’s long-time band ‘The Good Long While’.

Whilst the lead single ‘Fresh Kill’ kicks off the album in an underwhelming bluegrass fashion, the rest of the record is solid, with the second track ‘’Last Train’’ showing how very accomplished Amanda is as a writer and vocalist. Her voice is so refreshing, and the style of music so organic that it is so easy to get caught up in the gripping story told about a man begging for a woman’s hand, and leaving after rejection. Once Amanda’s character realises she misses him it is too late, and this story of regret and loss is absolutely fantastic listening, not purely for the vocals and the writing, but also for the great music in the background.

This musicality continues in ‘’Close To Me’’ with a sharp lap-steel introducing the song. ‘’Close To Me’’ is a little less traditional in style, with more of a folk-pop leaning and being a love song rather than a story song. More upbeat is ‘’Another Temptation’’ which contains a faster percussion backing and male harmonies to accompany Amanda’s more fiery offering. Again, the lap-steel is on point, and is becoming a recurring highlight throughout the record.

‘’First There Was’’ is the first chance we get to hear a duet on the record, and Steve Moore, the aforementioned superb lap-steel player takes the lead vocals on the track, with great harmonies with Amanda on the chorus. It’s great to hear the change-up in style, and Steve has a great voice for down-to-earth storytelling and blends well with the blemish-less Amanda Richards. It’s great to hear the talents of the band being utilised, and it isn’t hard to imagine that ‘’First There Was’’ would be a staple of the live show, with great chemistry between Steve and Amanda.

‘’Cinderella’s Waltz’’ is the first real taste we get of the electric guitar. Not that this means there are rock ‘n roll solos, but the guitar backing has the electronic edge, aiding the drama of the song which is quietly dramatic, focusing on the fallacy of fairy tales and the difference in reality. Melodically it is enthralling, and equipped with Steve on his lap-steel the song is so complete-sounding it is show-stopping. With lyrics you could listen to for hours, ‘’Cinderella’s Waltz’’ is a real highlight of a great album.

A starring role is given to the banjo on ‘’Nothing More Flammable Than Sentiment’’ which revolves around the tumultuous nature of relationships. ‘’The strike of a match/ Memories aflame/ Nothing but a ghost of our love remains’’ is one of the great lyrics in this short song, almost styled as a perverse nursery rhyme displaying a dark humour through it’s fairly upbeat tempo and sprightly lyrics focusing on relationships crashing and burning. It’s quite humorous in a way, and is quite interestingly styled, so much so that due to it’s short 2:29 length, it is worth a repeat or two!

‘’Tough Ones To Love’’ is a wonderful record, musically sharp, lyrically beautiful and thematically tragic and beautiful all in one. Amanda has a marvellously emotive voice, and her band are amongst the best proponents of their craft I’ve heard. I can’t wait to delve into more of her music.