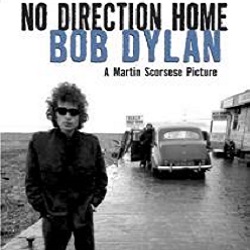 It would be a huge exaggeration to say that Martin Scorsese’s documentary film on Dylan‘s early years in Greenwich Village reignited his career but, when it was initially broadcast in 2006, it did serve to increase interest in the Nobel laureate to be by a considerable amount. Certainly the subsequent legs of the so-called Never Ending Tour took in venues like the O2 Dome and Wembley Arena, a step up in size from the likes of Hammersmith Odeon. No Direction Home was also directly responsible for the fictionalised portrayal of the times in Inside Llewellyn Davis. It’s quite understandable that this might happen, as No Direction Home portrayed one of the most fascinating parts of Dylan’s musical career – his early scratching around in the nascent folk revival to becoming the man with his “finger on the pulse of his generation” and then on to the shock and betrayal of his picking up The Hawks and going electric. This latter section, naturally enough, relies on material culled from Don’t Look Back, D.A. Pennebaker‘s film about Dylan in England in 1965 – but it is complemented by extensive use of in-depth interview material from the likes of Joan Baez, Liam Clancy, Dave Van Ronk and Dylan himself.  There’s also considerable footage available of a young Dylan performing on various TV shows – although sadly no-one caught his coffee house routines on moving film.  Photographs there are in plenty, slyly illustrating an anecdote of Liam Clancy’s that Dylan was always just there, hanging around, sometimes infuriatingly persistent and omnipresent – and there he is in a photograph on the edge of a stage, or in the middle ground of a shot of a crowd. Always there, always soaking up what others were doing and building on it.

The main additional items included in this 10th anniversary reissue are the full interviews with Dave Van Ronk and Liam Clancy as well as a good length interview with Martin Scorsese which captures his thinking about the project. The Dave Van Ronk interview is fascinating, with lots of insights into the excitement and activity (and the poverty!) that surrounded the folk singers that gathered in Greenwich Village from the late 1950’s onwards. It’s difficult to watch though – the automatically panning camera induces a sense of mal de mare after a while. The Liam Clancy interview gives a great overview of the Clancys – it’s easy to see why some of this material didn’t make it into the main body of the documentary as it barely touches on Dylan for a lot of the time. On top of this there are various performances by Dylan taken from his TV appearances and several of his songs sung by some of the No Direction Home interviewees. Of these the most touching is Joan Baez singing “love is just a four letter word” – there’s a lot of emotion and several flashes of her hard bought impersonation of Dylan’s nasal folk singing style. The one missing element is the full Dylan interview – I can state without any fear of contradiction that a lot of people buying, or rebuying, this package would have appreciated the full 10 hours, thank you very much. It’s not there.

Rewatching the documentary reveals the young Dylan again – and he is very young to be hustling around and, on the side, writing Blowin’ in the Wind and Masters of War and Only a pawn in their game or Song to Woody. He’s young to be opening for John Lee Hooker. He’s too young to be walking around New York in the snow with Suze Rotolo with far too thin a jacket on. Here is this small, hyperactive, always jostling and jumping around pretty youth who brought out a mothering instinct in the women he met, and an instinct to beat him with a baseball bat from those he stole records from, who leapfrogged his contemporaries who were just getting by to become arguably the most important American musician of the second half of the 20th century. It is astonishing, and one can see it all laid out as seemingly by one random step to another random step he became a colossus of popular music and eventually just too big for the scene that had nurtured him. The footage from Don’t Look Back is still riveting – the huge crowds turning out and paying good money to just boo and hurl cat-calls at an artist they had idolised and who was now in the process of escaping from their possessive clutches.

There are several versions of this re-release including the first issue on BlueRay. There’s also a deluxe edition which comes with a book, but it’s the documentary that is an essential purchase, the generous extras just serving to emphasise this.

One of the finest films made about Dylan is polished up and has a heap of extra material attached. It remains required viewing for anyone interested in the Greenwich Village Scene and Dylan.