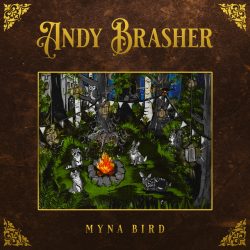 ‘Myna Bird’ has a strong country-rock style throughout. Songs are full of soaring guitar solos, vibrant riffs and a honky-tonk sensibility. It’s easy to see how his previous band, known as Brasher/Brogue, could provide support for artists like Tim McGraw, Kid Rock, and Kenny Chesney, amongst others.

Many songs are in the country-story-telling tradition. In ‘Day of the Trial’ we’re faced with love, crimes, drugs and music, and hey, “the bottom of the bottle wasn’t too far away”. ‘Crows and Buzzards’ is a dark murder-ballad with a mellower style and striking harmonica as the protagonist states “I’m leaving my lover to the crows and the buzzards”.

Ironically, as the album contains the track ‘Myna Bird‘ written because Brasher’s mother gave him this as a nickname as a child – meaning he had the ability to mimic and memorise lyrics quickly: a number of these tracks feel like they’ve been done before.

But, when Brasher reaches into his own experiences, it’s a different story. ‘If She Loves‘, a song written for his girlfriend, is delicate, poignant and the lyrics are wonderfully heartfelt. It’s a more stripped back acoustic track to begin with and Brasher’s vulnerability shows through.

‘Drugs in The Tipjar’ tells of Brasher’s experience of playing Nashville’s bars and often getting more than cash at the end of the night. It’s a fun honky-tonk song – something he does well. This is seen also in ‘Checkbook’ where he’s asking for divine help with his bills: “Lord, won’t you buy me, a Mercedes Benz” and ends with an outake-ish “I’m just having too much fun, man”.

Overall,  the album overall contains a couple of stand out tracks where Brasher’s personality shines through, but too much reliance on nostalgia around standard country clichés undermines many of the tracks.