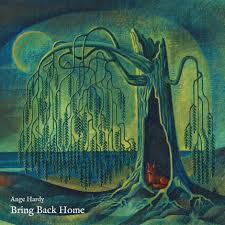 A turbulent and sometimes tragic childhood was the prelude to 14-year-old Ange Hardy running away from a children’s home in Somerset and finding herself homeless on the streets of Ireland. Handed a guitar as a chance to move from begging to busking for a living, music became a counsellor for Ange. Bring Back Home is the sixth studio album from the BBC Radio 2 Folk award nominated singer-songwriter and, by her own admission, many of these songs are set within the same fictional landscape that permeates much of her output. So it is that we have an opening track, Sisters Three, with the jauntily upbeat accompaniment disguising the mystical undertones of the song which is, at its heart, a folk story about the origin of good and evil in the heart of mankind.

Each song is a story and, in an age where the download is king, then this is a celebration of the art of the physical album with the wonderfully illustrated booklet and detailed sleeve notes bringing the origins of the songs to the fore. In singing of sailors and sweethearts perishing at sea (Bring Back Home) or of ancient folk tales of Somerset saints (St Decuman) Ange Hardy wouldn’t be unique in the folk world.

However, for every retreat into the mystic and ancient there is a clarion call to the harsh realities of the present. What May You Do For The JAM? relates to Theresa May’s use of the phrase ‘JAM’ to describe families that are ‘just about managing’. At this uniquely bonkers time of year the words ‘The overdraft’s heavy, the fridge isn’t empty but Christmas…oh God, just the thought!’ may resonate with many.

Similarly, A Girl Like Her is a song for Ange’s daughter and, in its tale of the complicated bundle of uniqueness that is any child diagnosed with ADHD or Asperger’s, then Hardy has once again brought a very personal and relevant update to the art of storytelling through traditional folk sensibilities.

All songs are written and arranged by Ange. It is no surprise that her glorious vocals dominate but Hardy has also excelled in her production of the album that allows her hugely talented accompanying musicians to shine and bring new layers of warmth and depth to the 14 songs. Bring Back Home has set its roots firmly in the world of folk but with a quality that will surely appeal outside of that genre.