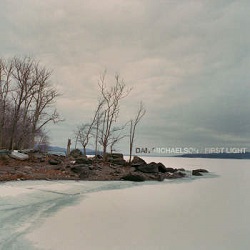 First Light is an album of elegant music which serves as a frame for Dan Michaelson’s distinctive cracked and battered vocals – like a canvas sail hauled out for another use in the face of an oncoming storm. A concept album of sorts, based on the thoughts that fill the mind as consciousness returns as somnolence is reluctantly thrown off, and on the evidence presented here Dan Michaelson’s dreams are often troubled with uneasy sleep.

Over sharp strings and icily repetitive piano the songs develop like the journey towards the first cigarette or cup of coffee, these are latter half of the year mornings – sunshine or even the lingering warmth of a summer’s night seem to rarely feature in Dan Michaelson’s waking world. This suits the thoughts examined, ones of self doubt and recrimination – and thanks to the downbeat tone of the album even a love song like Stone takes on this same air of floating nearer to grief than to the ecstasy of hearts entwined. Through Dan Michaelson’s slow drawl of a delivery “I see you, I’m no longer alone / we are more than words carved in Stone” takes on a funereal otherness. Songs merge into each other – not just through the continuity of the accompaniment but as dropped stitches of thoughts are picked up from one song – from one morning – to the next. There’s often a tentative feel to the embracing of the next day – Don’t let it pass slowly muses on the importance of not letting time flow away in a fleeting life – the transition of the grey light of pre-dawn literally emphasising the flooding away of lost time.

If it is nothing else then First Light is a thoughtful album, and one which ironically suits late night reflection. The spaces between the notes and the gulfs between the words leave the listener with the opportunity to spin off on a stream of semi-consciousness of their own, but guided perhaps towards the bleaker side of life by that distinctive vocal delivery.