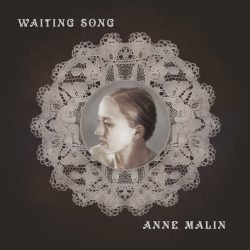 Nashville duo Anne Malin (Anne Malin Ringwalt and William Johnson) were all set to head into the studio and record a new album with a group of their favourite local musicians when the pandemic hit. “Waiting Song’ is the album they made instead, recorded and produced by the two of them at their home. The wonderful art-country sound has a real space and strangeness to it, with lots of haunting, layered, pedal steel, and many other strange sounds. This ghostly atmosphere peaks on the seventh track ‘Mountain Song’, which consists of an unsettling spoken word vocal and a jarring, alien soundscape.

It’s not all out-there experimentation, though, and there are many more traditional sounding tracks. Title track ‘Waiting Song’, a lockdown ballad if ever there was one, is a particular stand out, with a simple piano part driving it along and a wonderful vocal melody drifting above. It has the feeling of an old-time civil war song but with the alternative, artsy inflections which permeate the record.

This is a thoughtful, moody record with a genuine oddness which really shines. It isn’t dragged down by its experimental side, but rather lifted up. The intimacy and intensity of the recording and production process has no doubt added to the ghostly, dreamlike atmosphere, and the album is all the richer for it.