Gretchen Peters has composed hits for Etta James, George Strait, Neil Diamond and Shania Twain to name just a few, she has been nominated for Grammy Awards and was inducted to the Nashville Songwriters Hall of Fame in 2014. Brandy Clark has said of her, “Gretchen Peters is a songwriter’s writer – the kind of inspiring artist and writer we strive to be like and one we use as a measuring stick for our own work.” She’s also an inspiring performer and all of the above was in evidence tonight with a career spanning collection of songs whose captivating quality could not be denied. Aside from appearing with her band the show also featured a string quartet, a concept originally devised for Peters’ performance at last year’s Southern Fried Festival in Scotland’s Perth, hence the quartet’s name and the banner – “The Strings Attached Tour.” END_OF_DOCUMENT_TOKEN_TO_BE_REPLACED

It was almost like being at the Oscars as The Americana Music Association UK (AMAUK) unveiled their list of nominees for the forthcoming UK Americana Awards 2019 which will unfold at January’s AmericanFest UK. Stevie Freeman, CEO of AMA-UK, kicked the evening off with a short speech which was essentially optimistic regarding the state of Americana music here in the UK. Membership of AMAUK has risen and, due to the success of the previous festivals, the 2019 AmericanaFest UK will run for three days in its fourth year instead of the previous two-day format. There will be the two-day conference with a keynote speech from Rhiannon Giddens along with shows featuring 48 artists at various venues (up from 10 in the first year),  culminating in the prestigious UK Americana Awards at Hackney Empire. Stevie’s passion for the music, musicians and supporters shone through during her presentation. END_OF_DOCUMENT_TOKEN_TO_BE_REPLACED 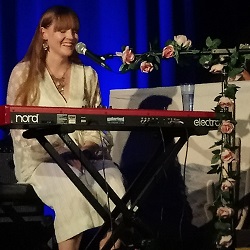 The last time Courtney Marie Andrews played London was September last year when she was riding high after her appearance on Later with Jools Holland, selling out two nights at Bush Hall.  I attended and reviewed these gigs here  and thought it would be interesting to see how far she has come since last year  when she told the audience she was recording a new album playing several songs that would eventually surface on ‘May Your Kindness Remain.’ The album came out in March this year and tonight’s show featured many songs from this latest release. END_OF_DOCUMENT_TOKEN_TO_BE_REPLACED

It’s taken Will Varley nearly 15 years to cross Shepherds Bush Green, from where he used to play at Ginglik (a venue in a converted Edwardian public toilet at the other end of the roundabout) to the Shepherds Bush Empire, a venue he would pass walking home after playing there. Tonight Varley took to the Empire stage on his own with just his acoustic guitar and launched into ‘As For My Soul‘ and received an immediate response from the enthusiastic crowd with a sing-a-long on his first song of the evening. END_OF_DOCUMENT_TOKEN_TO_BE_REPLACED

I’m With Her is a group consisting of Sarah Jarosz, Aoife O’Donovan and Sara Watkins. All three are multi-instrumentalists and vocalists and have their own solo careers. After an impromptu performance together at the Telluride Bluegrass Festival 2014, they realised they had something special. Sharing many awards between them, including three Grammys, they have released nine solo albums to date and co-founded two influential bands (Nickel Creek and Crooked Still). As I’m With Her, they have previously released a single and EP and their much anticipated first album ‘See You Around is due out on 16th February. The album was recorded at Peter Gabriel’s Real World Studios in Bath and co-produced by Ethan Johns with the band.  END_OF_DOCUMENT_TOKEN_TO_BE_REPLACED

In the intimate setting of Bush Hall, I’m With Her (Sarah Jarosz, Sara Watkins and Aoife O’Donovan) gathered around a single microphone; the only amplification used during the show, and opened their show with Little Lies from the EP of the same name. The attentive audience were immediately captivated by the haunting fiddle opening played by Watkins, then the delicate vocal of O’Donovan and then the harmony of the band singing together.  You could have heard a pin drop until the song finished and the room was then filled with applause. END_OF_DOCUMENT_TOKEN_TO_BE_REPLACED

On the last night of her UK tour Imelda May walked onstage to rapturous applause for her first headline gig at the Royal Albert Hall and performed a stunning stripped back rendition of Call Me.  This immediately demonstrated both her confidence and her clear and strong vocals.  The respectful silence showed that the crowd were spellbound which was confirmed by the reception she received once the song had finished. Her latest album Life. Love. Flesh. Blood, produced in Nashville by the legendary T Bone Burnett, has been the most successful and critically reviewed of her career. She showcased many tracks from the album and it was easy to see why she has won several awards this year and been nominated for International Artist of the Year for the UK Americana Awards 2018 END_OF_DOCUMENT_TOKEN_TO_BE_REPLACED

This was the second of two packed nights at Bush Hall and Courtney Marie Andrews and her band took to the stage and launched into Rookie Dreaming, the opening track from her current album Honest Life. Andrews’ vocals and her appearance at once suggest that you could be watching a young Joni Mitchell but it does not take long to be swept up into Andrew’s world. And although you occasionally get a jolt of how Joni Mitchell like she is on certain tracks, this does not detract from the enjoyment of listening to Andrews and her band. END_OF_DOCUMENT_TOKEN_TO_BE_REPLACED

Amy Ray and Emily Saliers took to the stage to rapturous applause and resounding cheers.  It’s been eight years since they last toured the UK and it was clear that the Indigo Girls had been missed as they launched into Fighting For The Love Of Our Lives, an upbeat number with lovely harmonies. For the next song, Ozilline, they were joined onstage by Lucy Wainwright Roche, who contributed on and off throughout the evening. This was followed by one of the many highlights of the evening and a clear crowd favourite, Fill It Up Again. A mesmerising song with entwined vocals that exuded feel good vibes. END_OF_DOCUMENT_TOKEN_TO_BE_REPLACED

Raised in Jackson Tennessee Erin Rae has recently been Nashville’s popular choice for backing vocals and harmony work working with the likes of Margo Price and Andrew Combs. Her debut album Soon Enough saw her take the decision to step out from behind other artists and take centre stage and tonight she was  at the Green Note to promote her forthcoming album Putting On Airs while playing some songs from her acclaimed debut.  Rae has been described as Nashville’s best-kept secret but based on what I saw and heard tonight, she will not remain a secret for long. END_OF_DOCUMENT_TOKEN_TO_BE_REPLACED