At a recently revamped Borderline, Yola Carter took to the stage amidst an air of anticipation with Carter having recently won UK Artist of the Year at the AMA UK Awards. Carter is an immediate stage presence, both warm and welcoming and clearly the leader of the band. She immediately engages with the audience and throughout the night is both humorous and open with her  self-deprecating banter. END_OF_DOCUMENT_TOKEN_TO_BE_REPLACED 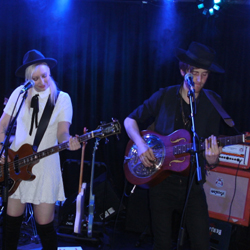 Curse of Lono’s show at The Water Rats was a launch for their anticipated debut album Severed. The venue has a rich history, Marx and Lenin are both reputed to have frequented the place during their respective times in London and Bob Dylan played his first UK show here in 1962. This, coupled with the band sharing their name with a Hunter S Thompson book, led me to wonder whether to expect something unusual, intellectual, dangerous or deranged.  What I got was a bit of each from Curse of Lono, a London based five-piece band consisting of Felix Bechtolsheimer and Neil Findlay both from Felix’s former band Hey Negrita, plus Joe Hazell, Charis Anderson and Dani Ruiz Hernadez. END_OF_DOCUMENT_TOKEN_TO_BE_REPLACED