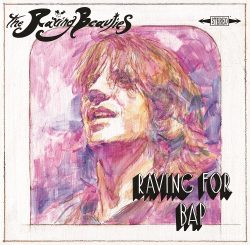 The music of the late Belfast singer-songwriter Bap Kennedy is being celebrated with a new release ‘Raving for Bap’ by The Raving Beauties, all profits of which will be going to Belfast’s Marie Curie Hospice. The release marks the 1st anniversary of when Bap passed away at the Hospice in November 2016 after a short fight with cancer. The 5-track E.P., which features original cover art by County Antrim artist Kenny McKendry and  sleevenotes from Belfast music journalist Stuart Bailie, is available for pre-order on limited edition 10” vinyl and via digital download. The record includes songs from Bap’s solo career as well as his years as frontman for Energy Orchard and is being released on the Farm Music label.

Bap’s sister Marian Bunton began fundraising for the Marie Curie Hospice in Bap’s memory at the beginning of 2017 by taking on the challenge of abstaining from alcohol for a year and proceeds from ‘Raving for Bap’ will be added to the £2,000 + Marian has already raised, with further fundraising activity being planned for the New Year.