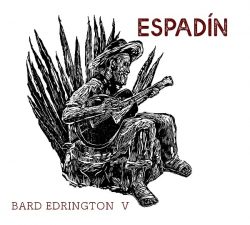 This is the first solo album by Bard Edrington V and it has the inescapable air of creative freedom. The written style encapsulates a strong sense of time and place and his storytelling approach is acutely observational, which when coupled with the range of musical styles he has mastered, intermingle to capture the listener and carry them with him on his journey.

His vocal style is undoubtedly closest to Townes in both the combination of lyrics and tone. At key times his voice breaks slightly, incorporating additional emotional content and expression. Coupling his self-evident musicianship with the ability to attract talented guest musicians, that combine throughout to compliment his own strengths, the high points of this album leave the audience in no doubt there would be no better place to be than watching Bard create something special in an intimate, possibly somewhat dingy local bar down in New Mexico on a hot summer evening.

The diverse range of songs capture a number of musical styles in varied combinations. Bard was raised in Tennessee and brings strong Appalachian elements to many of the songs. This is arguably most evident in ‘Rendezvous Duel’ and ‘Southern Belle’ but remains clear throughout. His previous work is mostly combined from Appalachian folk and Delta Blues. This release has expanded to capture a new southern desert sound with a touch of Mexican Mariachi. The overall result is most fresh and inventive when he combines guitar picking elements with traditional fiddle and more derivative when it relies on the electric blues guitar feel.

It is difficult to pick a single favourite from this fine selection. ‘Take Three Breaths’ builds implacably throughout as he heads south across the border suffering sideswipes and paying bribes to get to his destination. The title track ‘Espadin’ is most surely the main contender, as it sits comfortably in the centre of this world he has spun. ‘Two Ways to Die’ is equally close to the sweet spot and completely encapsulates the feeling of being lost in the desert in New Mexico. ‘Southern Belle’ operates from a background of intrinsic sparsity which allows the female supporting vocals and relentless rhythm to be expressed to maximum effectiveness.

The net effect of this combination of songs allows you to undertake the same journeys as Bard. It has the freedom of a musical Steinbeck drifting where it will, simply but beautifully capturing the emotional experience along on the way.

If there is any criticism of this album it is that sometimes the step change between musical styles feels too broad when he moves from Appalachian folk to Delta Blues. Where it is strongest is where the styles comfortably intermingle to create a tangible space that is at once new and fresh. Nonetheless it would not be possible to have found the exhilarating combinations he has discovered without exploring the space between. Who could know that an Appalachian Mariachi combination was what they were looking for until it arrived fully packaged and wrapped for your undoubted delight?

Bard has found a home in a new place on the southern border along with some great neighbours. The exploration of this country is exciting. He has undoubted talents and given the time and space to explore, he is going to continue to produce more fantastic music.