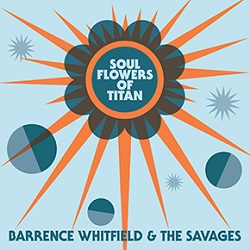 The old saw is that “the blues had a baby and they called it rock and roll”, and that’s a fair enough claim even if it does leave elements of hillbilly country and other musical genres out of the gene pool. It explains, though, that rich vein of music that gets called blues-rock, and other related mutations like the acid-blues and psychedelic soul. Matter of fact it’s a hell of a melting pot, and Barrence Whitfield and the Savages stir that particular mess around like master chefs before dolling out fourteen perfect takes on the basic recipe.

Most of the songs on Soul Flowers of Titan are well under three minutes in length – they come in punchy, do their job and depart. For the most part, having at least one foot deep in the electric blues, they deal with the fundamentals of life with variations on the themes of – man meets woman, woman treats man bad, man treats woman bad, woman treats man good but man leaves anyway, man can’t find a woman and feels bad. This could be a prescription for the dull, cliched and repetitive. In lesser hands it would be just that. But Barrance Whitfield has a voice that cuts through the crap – it’s a commanding bellow, an arresting shriek, a deep rumble of thunder. The band have no bluster, every note is designed to excite. Sometimes the songs are just servants to the solos – particularly of lead guitarist Peter Greenberg who knows when to accompany, knows when to boogie and knows when to let out an incendiary burst of notes – and this is no bad thing either.

And there’s subtlety too, if one listens carefully. Adorable takes a poke at the contradictions thrown up by an ever present gun culture “I’m gonna get a gun / just to shoot it at the sky / I think it might be good / even though I don’t know why / I think I might feel safe / knowing that I can shoot / at a moving target / Even if it doesn’t move”.  I’ll be home someday adds a shot of hot soul into the album, as classically groovy as anything you might love from that late sixties explosion of soul sound. There’s knowing humour in Tall, black and bitter which could be about coffee – “tall black and bitter treats me just how I like / wakes me up in the morning and won’t let me sleep at night” – but it isn’t. It isn’t just about Whitfield’s female companions either, as he adds “it’s just who I am / Tall black and bitter I’m an angry man”. This is music that shakes and excites, that throws the listener about and leaves them drained – but in a good way. Unashamedly excellent throughout.

No-one out hollers Barrence Whitfield. Nobody.