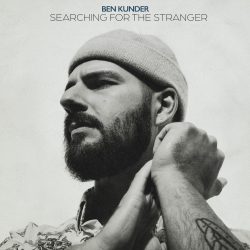 Alarm bells start ringing for this writer when faced with a promo picture of a singer-songwriter replete with a beard and sporting the obligatory woolly hat. Fearing the worst, tracks are cued up with trepidation. Phew! Relief! This isn’t one of ‘those’ records. Canadian (Toronto-based) Kunder knows about melody and pop sensibilities.

It’s not really folk, or indie-folk. It’s on the very edges of what we’d normally cover at Americana UK. Probably even beyond that edge. You could say it’s like Snow Patrol, but better. Or Coldplay, but much, much better. They’re not entirely fair comparisons though; Kunder has chops above those two puzzlingly popular lightweights. There are hints of Brian Wilson in his tightly layered harmonies, there are ethereal electronic sounds floating around and our man from Toronto has lyrical skills clearly superior to Messrs Lightbody and Martin. Kunder is very much Radio 2 in his appeal; which, if you like Radio 2, is clearly a good thing.

There are some highlights, for sure. Opener ‘Berlin’ is an excellent piece of melancholy guitar meets electro folk-pop (if that isn’t too laboured an analogy). It’s the best song on the album. ‘Stranger’ probably veers too much into fearful Snow Patrol territory, but it’s not without some charm. ‘Year’ picks up the mantle again; it’s the sweetest of melodies tied up in a gentle ballad. ‘Lunenburg’ is something similar, this time piano-driven. ‘Colours’ has a Simon & Garfunkel, maybe even Fleet Foxes pastoral folk sensibility. It’s a hazy daydream turned into musical form. Kunder is, as you probably understand, is not breaking any new ground with these songs. But he does what he does well; better than those previously cited, inexplicably popular artists. Best not to mention those names again.

Folk turns into pop. Maybe like Coldplay or Snow Patrol. But Better.