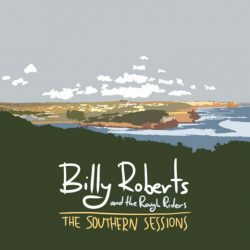 Australian band, Billy Roberts and The Rough Riders has given new life to some of their best songs with ‘The Southern Sessions’. The ten tracks include some fan favourites from the past few years such as ‘Hillbilly Blues’ and ‘Kayla’. The reinvention of some of the songs almost makes them sound new. It’s clear at the first listen that the band has some strong rockabilly influences, yet they have managed to create a unique twist with it.

The Americana, alt-country infused album opens with ‘Hillbilly Blues’ which was originally released as a single back in 2018. It is definitely a strong start to the album, with great guitar riffs and a low country drawl. It is an attention grabber of a song which reels you in a listener.

One of the biggest changes to their songs is seen on ‘No More Mr. Nice Guy’ which is sung with a new tone and big changes to the instrumentation with cool guitar slides halfway through the piece. Definitely better than the original.

Re-recording new versions of old songs was a bold move, as you run the risk of upsetting fans that fell in love with the original songs, but Billy Roberts and the Rough Riders have managed to walk the line very carefully to create a new sound which doesn’t stray too far from what their audiences know.

Reimagining their old songs with a new twist