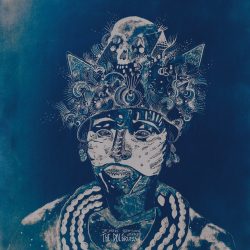 The title ‘The Doldrums’ is a fairly hefty giveaway that the fourth album by Danish singer-songwriter Bjarke Ramsing is  largely based around tales of the sea and seafaring lives, with its aim being partly, as the publicity blurb puts it, “to explore the many ways in which people find and create beauty from within the filth of modern western life.” But if such earnest content matter sounds like heavy going for, say, a mellow Saturday night’s listening, do not be deterred. In fact, ‘The Doldrums’ is an accessible, well-rounded mixture of classic and freer-form acoustic folk, with fragments of faster-paced jazz themes sometimes spicing things up,  and at other points streaked with deep melancholy.

‘De Lange Øers Sind’  –  ‘The  Spirit of the Long Islands’, the album’s only song in Danish – is probably the most harrowing of all eight tracks.  Written about the long illness and death of Ramsing’s mother and his memories of the seas and islands that he most closely associates with her,  it has a truly heart-rending edge.

‘To the Tallest Tree’, dedicated to Ramsing’s mother and with its lyrics in English, has a similar kind of fragile but determined defiance even in the most challenging of circumstances,  when a feeling of mortality is almost too close to bear.

“Still I’m by your side
till all our worlds have been forgotten
in this silent tide
That holds your breath as you’re leaving.”

Throughout ‘The Doldrums’ the guitar playing by Ramsing is sustained but understated, with barely a single solo in the entire album. But the scarcity of musical pyrotechnics is not necessarily a bad thing. It just means that even some of the more upbeat tracks, like the rollicking ‘Deep in the Dirt’, or the accordion-based shanty ‘Sailors Curse’, still feel inward-looking and reflective.  And when on the closing track, ‘Something Free’  Ramsing does let rip with his singing in the opening verses, the marked contrast in style with the more self-contained material on the earlier part of the album is almost a relief – and makes it all the more effective as the finale.

Another benefit of Ramsing’s stepping away a little from the limelight is that it gives plenty of room for his three accompanying musicians –  Teun van Langen on double bass,   Floris Venema on drums and percussion and, in particular, Annelies Jonkers on violin – to shine brightly in their own right. So whilst Ramsing’s scratchy-toned voice crackles and flares like a wintry fire in one corner of these spartan-sounding but beautifully constructed musical landscapes, overall ‘The Doldrums’ restrained, intense style is definitely one of those cases of ‘less being more’. A heck of a lot more.