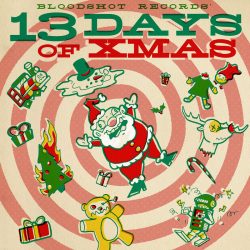 Lovely little piece in Rolling Stone Country yesterday about Bloodshot’s new Christmas comp which we’ll be reviewing any day now here at AUK. It beats the Bublé if you can beat your auntie to the CD player: “No matter where you fall on the love-it-or-hate-it Christmas-music spectrum, no one can escape the seasonal certainty of a new batch of holiday-themed albums guaranteed to roll out just as soon as (or, in some cases, before) the Halloween candy is gone. However, hiding out among the predictable retreads and reissues of this year’s yuletide collection lies the refreshingly irreverent 13 Days of Xmas from Bloodshot Records – a left-of-center, 100-proof Christmas compilation that simultaneously functions as both a warm invitational and a welcome escape from all the trappings and traps of the season.

“In January of this year, we finally acted upon the regret that we experience every year of asking ourselves why we didn’t put a holiday record out,” Bloodshot Records’ co-owner Rob Miller tells Rolling Stone Country. “It always kills us during that time of year that we just didn’t get our shit together in time. Thankfully we finally did this year.”

It’s no surprise that Bloodshot’s first major foray into holiday music is an unconventional compilation of sonically diverse artists rather than a full album by a single band, as that is exactly how the Chicago indie label got its start back in 1994 with the release of For a Life of Sin: Insurgent Chicago Country. For all the success the label has had with the concept over the last two decades, Miller exhibits a love-hate relationship with it. “Compilations… I don’t know why we keep going back to them. They are such a pain in the ass to pull together,” he says. “It’s like herding cats, but they’re just so much fun to do. Also, they’re kind of the most representative snapshot of who we are as a label and where our particular sonic heads are at.”

Over the years, Bloodshot’s refusal to play by any musical genre rules has become a creative calling card for the label. While they may be best known for putting out alt-country and Americana records by artist like Ryan Adams, Old 97’s, Neko Case and Justin Townes Earle, their divergent catalog also boasts releases that blend country, punk, R&B, roots, bluegrass, soul and folk as well. That musically adventurous ethos is felt in full force on 13 Days of Xmas, as classic country weepers and Sixties R&B rave-ups rub shoulders with garage rock instrumentals and gothic folk sing-alongs.

The LP’s sense of musical freedom is what makes its track list so different from normal holiday fare. A chilling version of “O Holy Night” by indie-rockers Murder By Death sits opposite the Wall of Sound sonics of Australian singer-songwriter Ruby Boots’ “I Slept Through Christmas.” Bloodshot actually just signed Ruby Boots to their artist roster this past summer, but the Nashville-based artist wasn’t initially excited about the prospects of contributing to the Christmas-themed compilation. “I expressed how creatively blocked I was because I have essentially been a bit of a Grinch for many years,” Boots tells Rolling Stone Country, “but sometimes it’s really rewarding to force yourself to write a song about something that you wouldn’t normally write about.” “I Slept Through Christmas” ended up becoming a reverb-drenched, nostalgic number that fits nicely alongside Phil Spector’s A Christmas Gift for You in the pop music Christmas canon.

As a nice familial bookend to Boots appearing as Bloodshot’s most recent roster addition, 13 Days of Xmas also features a track from Kelly Hogan, a prolific singer-songwriter who has appeared on albums by Neko Case, Jakob Dylan and Mavis Staples, and who also holds the distinction of being Bloodshot Records first-ever paid employee back in the mid-Nineties. Hogan’s track is a simmering, jazz-flavored cover of the country Christmas classic “Blue Snowfall,” originally performed by former Grand Ole Opry member and “Candy Kisses” crooner George Morgan. “I really like ‘Blue Snowfall’ because it’s really just a winter song and doesn’t specifically mention a holiday – it could be about Festivus if that’s your bag,” says Hogan. “I also like it because it’s very visual. I can see the snow falling outside a penthouse window. It’s the mid-Sixties. There are sheer drapes, silver foil decorations and someone is most definitely smoking a whole pack of Pall Malls.”

Miller believes the compilation’s overall image-inducing components is one of its most significant qualities, pointing to the album’s ability to move from raucous to romantic numbers without missing a beat: “You hear Devil in a Woodpile’s ‘The Pagans Had It Right’ and you think of semi-nudity outside by a bonfire, and right before that is Kelly Hogan’s ‘Blue Snowfall’ that makes you think of semi-nudity on a couch in front of a fireplace with someone you care about. It really goes all over the place.”

In fact, while most Christmas records can be accused of being too monotonous and repetitive, each song on 13 Days of Xmas approaches a different element of the season from a unique vantage point, both lyrically and musically. Barrence Whitfield mixes sleigh bells with slinky, juke-joint R&B on “Papa Barrence’s Christmas”; Ron Gallo slow burns his way through a roadside lounge-lizard version of “White Christmas” and Ha Ha Tonka’s “The List” is a bouncy, whistle-riffed rocker that wouldn’t be out of place in next year’s cavalcade of car commercials. Elsewhere, Jon Langford and James Elkington both draw from centuries-old Welsh and English folk traditions for their acoustic-led carols.

The album also visually nods to the holidays, albeit through a typically “outside the lines” filter: the cover art for 13 Days of Xmas features a playfully tongue-in-cheek “Island of Misfit Toys”-meets-Vertigoaesthetic courtesy of Chicago artist Pete Klockau. But it’s the vinyl release of the album that best illustrates the dual nature of the holidays – the LP is being issued in both green- and red-vinyl versions.

Nashville singer-songwriter Zach Schmidt sums up that duality in his contribution, “I’m Drunk Again This Christmas,” which beautifully bemoans bittersweet “home for the holidays” family interactions.

“This song isn’t necessarily about my family, but was inspired by anyone who feels the need to drink to get along with theirs,” he says. “If you are going to drink along with this song – or this album – be careful and good luck.”