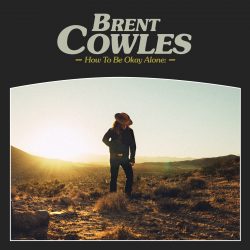 The debut solo album from Brent Cowles, ‘How To Be Okay Alone’, follows two well-received records with his band, You, Me & Apollo. His personal narrative has included a strictly religious childhood, divorce by the age of just 19, the break-up of his band and homelessness. ‘How To Be Okay Alone’ was the question Cowles asked himself, scribbled in his notebook, following another relationship breakdown. It is a deeply personal record that covers the range of emotions from self-doubt, lonesomeness and despair to exhilarating joy.

Cowles has toured with the likes of Israel Nash, Nathaniel Rateliff and Leon Bridges and all those influences and experiences have come together to produce a beautifully-balanced, soulful slice of Americana.

The album opens with the superbly crafted, rocky number, ‘The Fold’. The initial, gentle strum and sweet harmony soon give way to powerful guitar and a grizzled indie-rock vocal as Cowles delivers a personal message: “If I stop falling, I’ll have to hit the ground.” This track immediately showcases Cowles’s impressive range and explosively emotional tone. One of the lyrical devices Cowles uses to good effect throughout the album is the repetition of words and phrases that resonate, such as when he slows down and laments: “This little light of mine…Forgot what it’s like to shine.” The sound of the record is immediate and distinctive, full of personality.
There’s a change in pace for the second track, ‘Tequila Train’, which begins with a halting, melodic vocal over a slow, strong rhythm. There are excellent backing vocals and harmonies that give the song depth. In this authentic song of hard times, Cowles notes that: “Love exists in fiction,” and he asks for peace. The rhythmic picking of ‘Keep Moving’ follows, with its driving beat and rolling chorus. It’s one of the album’s highlights, connecting with the listener and offering a sense of something good ahead in an uncertain future.

Another highlight is the short but dreamy ‘Skylight’ with its beautifully gentle vocal. It is a hushed moment in the middle of an album that is otherwise full of rhythm and layers of instrumentation, strong beats and guitar. Throughout, the emphasis is on soulful melody and the range of Cowles’s characterful singing voice, particularly evident on tracks like ‘Fly On’ and ‘Velvet Soul’. It all comes together on ‘Places’, which begins slowly and delicately with a quiet power in the spaces between the notes. It refers back to his religious upbringing – his father was a pastor. The vocal switches from gruff and emotive to soft and pleading as Cowles sings: “I ain’t cut out / Must’ve switched cloth accidentally.” Although lyrically intimate, ‘Places’ builds up in layers into, perhaps, the ‘biggest’ song on the album. The final track, ‘How To Be Okay Alone’, very much has the feel of a final chapter. It is a plaintive, reflective ending, during which Cowles repeats: “You’d have to hold me down,” in an effortless high pitch over a gentle strum.

This is a solid, cohesive record: various styles and influences are held together by Cowles’s impressive vocal style and ear for striking melodies. For a debut album to have such a clear sense of identity is notable and suggests that Cowles has the potential to grow into a really special artist. At times dreamy, weary, intimate, bleak but hopeful, this is an album full of character and soul.

Impressive vocals and song writing on a well-balanced, soulful debut