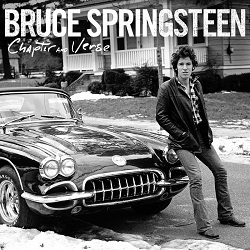 As is probably obvious from the title, this is the companion album to The Boss’ recent biography Born To Run – the songs chosen by him – and as such covers the breadth of his career, including a few pre-E Street Band recordings. It’s not exactly a best of, but with five previously unreleased tracks alongside a whole bunch of the big numbers it’s more of a musical life story. Springsteen has been a masterful exponent of reinvention – perhaps the best at this in the last fifty years. He hasn’t had quite as many musical changes of direction as Dylan, but easily as many as David Bowie. Where Bowie accompanied each side step with a new persona Bruce has managed to perform his musical shimmies whilst always remaining as The Boss. So from street poet and occasional funkster to documenter of the blue collar life then on to the unsurpassed master of Arena rock, inventing a huge tranche of what we call Americana, to folkie and breeze blown everyman then rock with a social conscience; and it’s all here to a greater or lesser extent on this album. For the purposes of full disclosure I should set down for the record that my favourite albums by Springsteen are – in a band setup – his debut Greetings from Asbury Park, N.J. and elsewhere it’s the bleak Americana singer-songwriter template that is Nebraska. For me the point where Springsteen became a truly global phenomenon was the point where something of what made him special was lost for a while – although latterly he’s done much to regain this.

To be able to start at the very beginning, there are a couple of fuzzy tracks by The Castiles which are pretty average sixties rock songs, by the time Springsteen was in Steel Mill there’s the start of a recognisable sound, and the Ballad of Jesse James by The Bruce Springsteen Band is almost there with some funky licks which wouldn’t sound out of place on The Wild, The Innocent and the E-street Shuffle. There’s a literal transition from this musical juvenilia to the Springsteen we’d recognise with a stripped back version of Growing Up, symbolically significant in this chronological context. From here-on it’s selections from various studio albums. The sublime story telling of 4th Of July, Asbury Park (Sandy) with its fairy-tale depiction of carnival life has tatterdemalion chancers drifting through a world of cheap glamour and easy thrills, flirting with “factory girls under the boardwalk where they all promise to unsnap their jeans”. The weariness of our narrator is palpable, the need to move on intense and the desire to take the one special girl with him laid out fair and square. This is Springsteen the mythologiser of New York, creating a tribute to the city as vivid in its way as the films of Woody Allen and, of course, just as much a creation of the artist – reflecting but disconnected from reality. No-one could really argue with Springsteen’s subsequent choices for the album. Born to run – the definitive (post-Maybelline) song about cars and sex in the whole of the rock canon, with that exhilarating mid-song count-in. It’s kids in souped up cars, their best girl cheering them on as they race – this was historically the very heart of rock and roll and the sudden up-swell of late-adolescent freedom, and Springsteen made it sound new. Shit – it still sounds new.

There are a series of vignettes of life in the subsequent songs – Badlands tells us to strive to find meaning in life, and to be unafraid to live. The River is Springsteen’s definitive blue collar bad luck story with the bleakness of teen-pregnancy and marriage before you’re twenty leading to a life unfulfilled “now I just act like I don’t remember, Mary acts like she don’t care” and this is coupled to an unflinching philosophy “is a dream a lie if it don’t come true ? Or is it something worse?”.  My Father’s House captures that bleakness and ratchets it up a few notches. There’s the pain of estranged families and the hopeless feeling of loss when it’s too late to reconnect. Too late. Stripped back to the bone it’s an emotional walk across hot coals every listen, with no soothing balm waiting at the end.

If, after the world arena rock domination of Born in the USA Springsteen never again connected with his multi-syllable poet storyteller side the tracks on Chapter and Verse post this subversive landmark show that he nurtured a developing streak of social commentary, and had that darkness in his heart still. One listen to The Ghost of Tom Joad confirms both of these statements. Whatever your thoughts on the slick eighties power pop of Born in the USA it was an incredible trick to pull off – selling millions of copies of an album that said “everything is not ok here, and we’ve done a lot of wrong as a nation”. That this message went over the heads of most listeners, pumping their fists to the chanting chorus of “Born in the USA” amazingly continues to this day, with the likes of draft-dodging Donald Trump playing it at his campaign rallies. It anthemic properties have served to make it as ubiquitous as Alice Cooper’s Elected or Slade’s Merry Xmas Everybody.

As with any collection it is possible to argue endlessly that this song should be on in the place of that one. It’s something of a shame that the early magic of epic tale such as New York City Serenade or Jungleland didn’t make the final cut as their multi-layered absence skips over an aspect of Springsteen’s early albums that really served to pull a lot of people to him in the first place. Never-mind: Chapter and Verse is a great collection and completists will want, nay, need those few first release tracks it opens with. So, judged on those criteria it’s easy to recommend – and if you don’t have a lot of Springsteen by all means buy this album, you’ll love it. For the rest of us who have most or all of The Boss’s albums it’s really an optional choice – but then, hey, there are those five previously unreleased tracks to contemplate.

Bruce Springsteen tells his musical life story on a well balanced collection that is offered as a companion to his new biography.