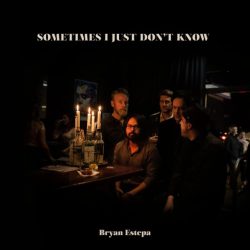 Estepa is a well-established Australian singer songwriter with several albums under his belt. While he is a fairly new name in the UK he is certainly worth your attention. Lead off song ‘I’m Not Ready For This’ an airplay hit in his homeland sets the tone for the album blending American and Power Pop into a one of the songs of the year.

Later highlights include ‘No Ordinary’, which wouldn’t be out of place on The Cars first album, and closer ‘Measure of a Man‘ which opens with a Tom Petty style flourish straight off ‘Damn The Torpedoes‘. The slower songs are the ones where the Americana side of his sound is the most obvious. ‘Granted‘ and ‘Valleys‘ are great country based ballads. The lazy comparisons given that he is Australian are Split Enz and Crowded House, but they are still valid. Estepa plays best in the ground between them – Wilco and The Jayhawks – jangly guitars, a solid rhythm section and a voice that carries hints of Jeff Tweedy. He says of the slightly downbeat title and lyrical content: “The title is a statement I wanted to make about the unpredictability of life and what it throws and brings to us”. Best example of his writing is ‘Drawn Like Magnets‘, melancholic words over a tremelo guitar riff.

The guitar playing on this album deserves an honourable mention as well. Band mate Dave Hatt, plays some cracking concise solos, and apologies if the credit should go to Estepa himself. All in all, an album that rewards repeat listens. Once you think you have found all the nuances, you notice the great harmony singing or the sneaky Benmont Tench organ fills that pop up on a couple of songs to raise the bar of an already good album to a highlight of the year.