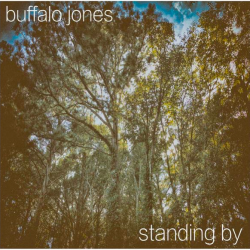 Buffalo Jones have been releasing music and playing together for over ten years now, and their latest release is shot through with a suitably reflective tone. There are songs about loss, heartbreak, the realities of touring, and, through it all, the hope and joy of playing music with your friends. The band describes itself as a rock band with “just enough twang to keep it interesting”,  and they are in danger of selling themselves short.

On the surface this is straightforward alternative rock/americana – big guitars, driving rhythms, and tasteful pedal steel. However, it has a real ‘twang’ of authenticity. Indeed, the record has some pedigree; produced by David Lowery of Cracker and Camper Van Beethoven, former bandmate of David Immerglück, now of Counting Crows. Lowery even delivers some wonderfully vulnerable vocals on two of the tracks.

There are hooks galore, some face-melting solos, and brilliantly catchy vocal melodies. Listening to the record is like listening to an alternative rock radio station – it really is an excellent no-filler collection of tracks, pinging along at an ever-entertaining pace.

That being said, when you read “alternative rock/americana” what you see is very much what you get and this isn’t a record that throws out any surprises. It’s a slick, well-produced sound with just enough edge to stop it from getting stale. This edge mainly comes from Jason Johnson’s consistently great vocals – walking an oddly compelling line between a country drawl and an early ’90s emo whine, he really ties the whole thing together and lifts it out of mere competence into something a lot more interesting.

Above all, this is a fun record to listen to. It’s the kind of album that makes you go and lookup if they’re playing anywhere near you anytime soon (sorry UK readers, they’re not, I checked), and that’s really something. Is it going to win any award for its groundbreaking, genre-pushing ambition? No. Should you listen to it anyway? Yes!

A brilliantly entertaining alternative rock record that plays it safe