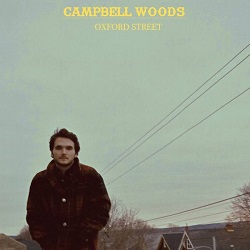 Oxford Street, in this case, is not the glitzy miles long street of vast temples of consumerism, awash with gee-gaws and superficially attractive but ultimately empty and worthless baubles. No, this is an Oxford Street of attractive clapboard houses – maybe in Halifax or Victoria, but definitely anchored down in a small Canadian city, with easy access to wider country around. That suits the songs – intimate and civic, rooted in relationships, but with an open and expansive feel to them. Campbell Woods has a beautifully modulated voice with which to tell his stories, and has a band that are sensitive to his emotional byways adding perfect touches of organ and pedal steel here, gentle supportive drumming and bass there.

The album opener tells the story of the Mad Trapper, empathetic towards Albert Johnson in this retelling of the 1931 manhunt. Campbell Woods’ sympathies are clearly with the almost mythical mysterious outlaw as a man trying to live his own life, relentlessly pursued by Mounties on foot and the airborne Wop May – the wilderness no longer a refuge against the burgeoning technologies of the twentieth century. It’s a great song, a modern take on The Wild Colonial Boy. The album doesn’t follow down this trail though, although there’s another nod to Canadian history in Under the canopy where Woods, sounding somewhat like a woebegone Graham Nash, references Sam Chaplain, the father of New France. What there is more of, though, is a series of shared confidences – the gently finger picked Blood is thicker than water is a choice take on sibling rivalry picked up as a loving duty “mother always told you I love you both the same / but he got her affection and you got all the blame / and on her dying day she told you I’m giving you a task / Look after your brother it’s all that I ask”. There’s a lightheartedness to the softly rollicking Let’s get back together with joyful couplets like: “the last time we spoke / I made a nervous joke / when you said your heart was broken / and I just laughed” and the wry “maybe old cupid missed / maybe he never drew”. This truly is quality songwriting.

Oxford Street is so harmoniously gorgeous throughout that it’s hard to credit that it’s a debut release – few indeed are the artists that appear so perfect on their first outing, and so brave. Your Loving Arms is a song that doesn’t pull punches in portraying the early death of a loved one “It’s not if but when now and I’m fixing to fold / How I wish in those six weeks we could grow old”. And to have such honesty about something we generally pussyfoot around – or just try to avoid – nestling amongst good-natured love songs and well drawn historical scenes is both unexpected and a wholly admirable thing to hear.  Campbell Woods – remember the name, you’ll be hearing it again.

Forget about glitz and glamour – this is singer-songwriter reality masterfully presented.