Although it was a Saturday and therefore de facto Bonfire Night a good-sized crowd piled into the basement of the Cookie and were rewarded with an outstanding evening.  Despite their name openers All Our Exes Live In Texas are from Sydney, Australia and are a delightful blend of folk and Americana.  The female four piece deliver gorgeous harmonies and some great songs while not taking themselves too seriously, happy to laugh at the odd on-stage fluffing of chords or telling of pointless stories.  They clearly enjoy themselves and the crowd respond to them.  Hopefully this won’t be their last visit to either Leicester or the UK. 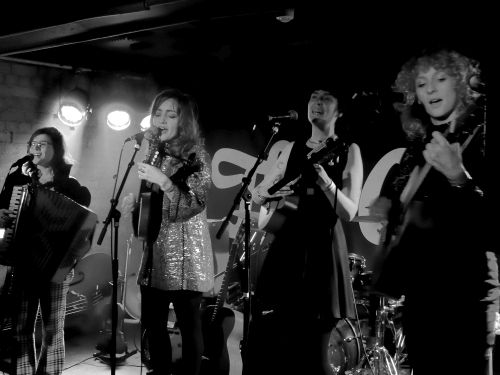 The main event shows just why CC Smugglers are one of the best live bands in the country and certainly the one that’s the most fun.  They’re all highly accomplished musicians with new-ish piano man Tom Seals fitting in perfectly.  Front man Richie Prynne can work a crowd better than almost anyone and by the second song the room is rocking with even people at the back dancing and as for singing along the crowd don’t need asking twice.  Plenty of old favourites are played including Lydia (which features some demon fiddling from Sam Barret), Grumpy (dedicated to anyone in the crowd who’s a bit moody – although when the Smugglers are playing that’s pretty much an impossibility), Dirty Money and Good Day, all of which are considerably amped up and not a little faster than the studio versions.  One ballad aside the pace never lets up, Prynne’s energy expenditure is so high it seems he must lose half a stone a each show, there’s plenty of impressive solo-ing and the crowd and band are one throughout.

The set ends all too soon with the final song being played acoustically in the middle of the audience.  This is a pretty well-worn thing now with an awful lot of performers doing it but the Smugglers sheer joie de vivre inject it with fresh life and it’s a great end to a glorious gig.  Too often Americana can be a synonym for earnest, dour and dark and there’s nothing wrong with that – sad songs are the best songs after all –but sometimes what’s needed is a no holds good-time show and that’s just what CC Smugglers provide.