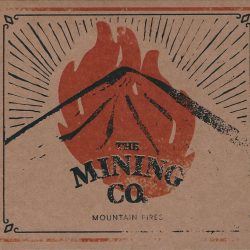 The Mining Company is singer/songwriter Michael Gallagher, indulging in the modern fashion of operating under a band name rather than his own. “Mountain Fires” is his second album, following on from 2016’s “Burning Sun and The Atomic Powers Within” and it’s an assured collection of well-written material. Given that it’s common for artists to use all their best material, often built up over a number of years, for their debut album it says a lot about Gallagher’s talent as a writer that he’s able to put out such a solid album so soon after his first offering.

“Mountain Fires” is quite a romantic album. It starts with Julie’s Song which is, quite simply, a musical marriage proposal. The assumption is that she said “yes”, since Julie Gallagher is name-checked on the inner sleeve. There is some very nice, delicate harmony work on a number of songs and, in the absence of any specific information, it’s to be assumed that this could well be Mrs Gallagher herself. The album is a little light on information about collaborators. The album, like Gallagher’s first, was recorded at Paco Loco Studio in Spain and it’s a very good recording. The standard of musicianship is high and the drumming is particularly impressive throughout, so it’s a shame that Gallagher hasn’t credited the musicians working with him on this album, though he does thank a number of people so, hopefully, they are the collaborators.

The stand-out tracks on the album are the excellent Against The Grain, which would seem to have a strong autobiographical theme to it – “I’m always in search of different things, the song that no-one else sings. Some here think it’s strange. I am always against the grain” – and Valentines to Write, another romantic but upbeat love song, sprinkled with a magic dust of organ swells that colour the song beautifully.

Gallagher has an interesting voice. On the lighter, folkier material like Julie’s Song  and Righteous Spirit, there’s a touch of Al Stewart to his vocal sound; but his natural voice is quite deep and, on the better tracks, is often reminiscent of some of Richard Hawley’s work – but he needs to be careful; some of the song arrangements tend towards a more MOR sound and, on these tracks, he starts to tip over into Don Williams territory. Not necessarily a bad thing, Williams has been a very successful artist, but you suspect that this isn’t the sound Gallagher is looking for. It’s on these occasional MOR moments that the production gets a little heavy. Do these songs really benefit from lush string arrangements or would he be better sticking to the more pared back approach that seems to serve his songs well.

“Mountain Fires” is a good album, full of strong songs that are well delivered by an artist with a distinctive voice and an interesting sound. Where does he go from here? He’s pulled off that “difficult” second album with some panache; what will the next album offer?

A singer/songwriter with a distinctive voice and an album of well crafted songs.