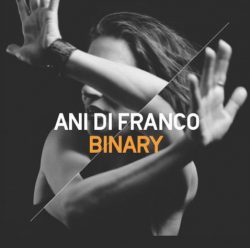 Singer-songwriter-activist Ani DiFranco has announced her twentieth studio album “Binary” which is set to hit stores and the interweb on June 9th. The iconic singer/songwriter/ activist/poet/DIY trendsetter returns to territory that brought her to the world’s attention more than twenty-five years ago now we’ve got another headcase in the Whitehouse. European Fans can pre-order the album now and exclusively in CD, and vinyl formats from Ani DiFranco’s PledgeMusic campaign page. Pledgers who pre-order the album will receive three “instant gratification” tracks and access to exclusive artist updates and bonus content. Fans will also be able to order special memorabilia including lyric books, t-shirts, screen-printed posters, totes, socks, signed guitars, and art prints.

Written prior to the 2016 election, the songs on Binary are prescient of the current political situation in America. Ani tackles the challenge and necessity of teaching non-violence with “Pacifist’s Lament” and the need for empathy in “Terrifying Sight.” “Play God,” a rallying cry for reproductive rights, is currently playing out in Congress. And on the title track, DiFranco reveals the larger meaning of the album. “This binary principle is echoed throughout our bodies, “ Ani notes. “With one ear, we “hear” but only with two ears can we perceive the full spectrum of depth and position. This idea that refuses now to let me go; that nothing can truly exist except in relationship with something else, is where this song and this album are coming from.”

She’s also playing some UK/Ireland dates in June/July including Glasto.  And here, dear readers, they are, along with the first single from her new album.

About Mark Whitfield 1542 Articles
Mark Whitfield has been Editor of Americana UK for the last 20 years while also working in public health as his day job, which has been kind of busy recently.