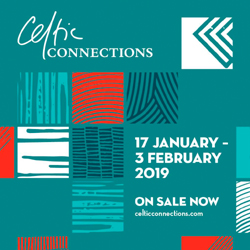 Glasgow’s annual winterfest of roots music has unveiled the line up for 2019 and as usual, amidst the myriad of acts with more than 300 events taking place over the festival’s 18 days, there’s plenty of Americana acts to enjoy. As Donald Shaw, Creative Producer for Celtic Connections, says, “Every year we strive to programme the most diverse and eclectic festival yet and 2019 is shaping up to be just that. From artists who have influenced the current scene, to musicians who are re-defining the music of tomorrow, Celtic Connections 2019 will continue to embrace a huge range of styles and genres that showcase artists and cultures from across the world.”

Famed for their one off showcases Celtic Connections will present another episode of the well loved Roaming Roots Revue, hosted and curated by Roddy Hart, which this year celebrates the 50th anniversary of The Beatles’ ‘Abbey Road’ album. In addition the 10th anniversary of John Martyn’s passing will be commemorated in a show titled Grace and Danger with  a cast including Paul Weller, Lucy Rose, Eddi Reader, Ross Wilson, Rory Butler, Eric Bibb, John Smith and Katie Spencer and of course, Danny Thompson.

With much more to choose from and with more acts still to be announced Celtic Connections 2019 looks set to be the place to be to warm up in the dark nights of the New Year. Tickets are now on sale and all details can be found here.