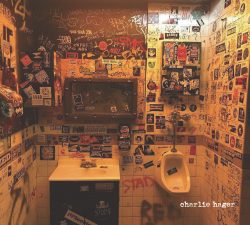 It’s always interesting as a reviewer when you get presented with an album from an artist you’ve never heard of and know nothing about. The good news is that it’s listened to with an open mind and with no pre-conceived notions about what to expect regarding musical style or quality. Such as it is with Charlie Hager and his second album ‘Truth and Love’.  Hailing originally from Nashville you could probably guess that his musical influences will be derived from traditional country and to an extent you would be right but there are tinges of bluegrass and the  judicious use of trumpet throughout makes ‘Truth and Love’ difficult to categorise – and that is the strength of the album in many ways.

The seeds of ‘Truth and Love’ originally started to germinate in 2015, just prior to his first well-received album ‘American Saga’ being released and the title track was conceived during the US primaries as Hager contemplated the lies being propagated by the various politicians (no shock there then!).  The title track, though, is the only overtly political song on the album and most of this release is focused on relationships and given his backstory, maybe that’s not surprising. After graduating from university, Hager joined the Marine Corps and then travelled the world courtesy of Uncle Sam and for the first time started playing and writing.  He returned to Tennessee in 1991 and after getting married in 1993 and raising three children, he returned to music in 2011 following his divorce from his wife and with the help of some friends he started to break into the Nashville music scene.

There is a hint of darkness in some of the songs and the closing track ‘Stand a Chance at All’ may echo back to Hager’s past as he reflects on how people need to learn to change their behavioural relationships if they are to succeed when things inevitably go wrong between them. That hint of darkness continues on ‘Trying to Lay the Blame’, a deep reflection on the darker side of the human personality that may rear its ugly head at the most unexpected of times. It’s not all gloomy reflection, though. ‘All Yours’ is a hugely romantic statement about enduring love and ‘She Wants to Believe’ continues in a similarly tender fashion.

Throughout ‘Truth and Love’ Hager’s voice, with small hints of Willie Nelson at times, is front and centre, but he is ably supported by some fine playing from the nicely muted trumpet of Robert Gay, while C. J. Colandrea on steel guitar and Daniel Foulkes on fiddle make important contributions. ‘Truth and Love’ is a very solid offering and while there are no absolutely knockout individual tracks on the album there are definitely no clunkers or fillers in here either and the mix of instrumentation and styles works very well throughout. You may not know Charlie Hager when you first hear ‘Truth and Love’ but if you listen carefully to the lyrics you will certainly feel like you know him once you’ve listened to this fine album a few times.