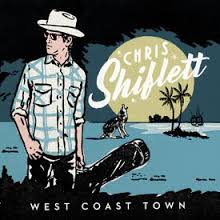 Nashville based Grammy award winning producer Dave Cobb is hot. His work with the likes of Jason Isbell, Chris Stapleton and Sturgill Simpson have garnered a well-deserved reputation for excellence. Thus, any work with his name attached demands our attention. So it is here, with his name as producer and player on the Chris Shiflett album West Coast Town. Chris may be better known as lead guitarist with The Foo Fighters but a few years back he set up a country oriented side project and released a couple of albums as Chris Shiflett & The Dead Peasants. His latest offering is a solo release but with a talented supporting cast that includes the aforementioned Dave Cobb on acoustic guitar.

The result is an album of six self-penned songs and four co-writes with Brian Whelan that are built around the driving rhythm of Chris’s electric guitar. Tracks such as Goodnight Little Rock and Still Better Days allow him to show off his skills with short, but memorable, solo contributions. Room 102 and Blow Out The Candles are excursions into a relatively more gentle acoustic place led by that man Dave Cobb, again with some excellent support from the pedal steel of Robby Turner.

If the album affords ample opportunity for Chris to show off his skills with a guitar then it shouldn’t overlook the fact that there is some great, and at times, particularly unambiguous lyric writing here. The title track has a great rhythm that brought to mind that oft played classic Wagon Wheel but with the added bonus of chorus lyrics ‘Ya I grew up in a West Coast Town, back before they chased the working class out, you know we don’t fuck around, where I grew up in a west coast town.’

Goodnight Little Rock is a hymn to the vagaries of life on the road, from the ups of ‘Tonight we turned 100 strangers into our best friends’ to ‘Another shitty PA, another night of no one at all’. There are love songs. Of course there are love songs.  Room 102 is a highlight of the album with the tale of a man consumed with undeclared love for a long-term friend as he sits alone and drunk in a hotel room teetering on the brink of sending that text or making that call that will change the terms of that friendship forever, ‘Wait until all my inhibitions fall, like a hand grenade in my palm, I pull the pin and I make the call.’

The album closes with Still Better Days, a muse on the creeping onset of middle age that evolves into a declaration of love and the certainty that even if we have seen better days there are plenty more ahead. This is a fitting climax on which to wrap the album up, both lyrically and with a brilliant fade out guitar solo.

This is an album worthy of the history and talents of Messrs Shiflett and Cobb. The only complaint, a measly 31 minutes of music races by in no time at all.