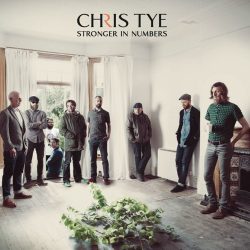 The singer-songwriter genre is heavily over saturated and sometimes it can seem a bit like anyone with a guitar and half a voice can record an album (whether it is of any quality or not) and get it out there but every once in a while you stumble across someone with a little spark about them, something that sets them apart from the rest. Chris Tye has that spark and ‘Stronger In Numbers’ is on fire. The album begins slowly with Feature Fight which is a brooding, building track with a brilliant falsetto chorus. However, it doesn’t stand out as a huge opening track and just as you think you can expect what is to come, the album steps up a gear and from that point the album is all killer, no filler.

From the bouncing Love On The Line, the Beatles-like melodies found in Low On Time or the heartfelt, waltzing ballad No Sing featuring another gorgeous falsetto chorus, Chris Tye doesn’t seem to be able set a foot wrong. Each and every song is written with the intention of getting stuck in your head, to the point that almost every one could be released as a single. The true album highlights come in the form of album namesake Stronger In Numbers which emphasises and builds on the positive message found throughout the record but once the chorus kicks in with its sparse instrumentation and crisp melody, you can’t help but sing along and likewise, one of the later tracks on the record More Than A Dream is a soaring, dream-like epic with a huge chorus which wouldn’t sound out of place being performed in arenas across the country.

With the right support slots and the right people behind him, it is a matter of time before we see and hear a lot more of Chris Tye in the mainstream – with an ear for melody, a versatile and dynamic voice, a talent for crafting tender yet simultaneously powerful songs with relatable lyrics and a strong message, it would be a crime for him not to see the success and popularity that some of his contemporaries have seen over the last few years. It can take artists years to release such a coherent, established set of songs and with Tye only on his second record, it’s a real possibility that the best is still yet to come.