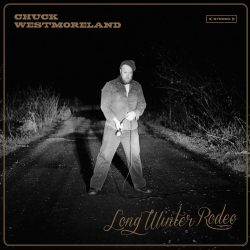 ‘Long Winter Rodeo’ is the second solo outing for Portland-based, singer-songwriter, Chuck Westmoreland. Available on Black and Gold Records, it’s an infectious collection of well written story based songs that exude honesty and emotion. There is a darkness in these tunes that feels real. The music paints a picture that draws you in and the words make you want to stick around.

For a songwriter it’s all about the songs and where better to find inspiration than in your own bar. ‘The Red Fox’ is Chuck’s own place which he compares to the creepy watering holes of Twin Peaks. Personal experience, combined with the flow of life through the bar, provides a solid foundation for the record. The songs are that good you’ll want to head down there for a beer after the final notes fade away.

There is noise and quiet in the music. The driving guitars that thread through the album are made even more powerful knowing that Westmoreland made them himself. “I made six of those guitars,” he says, highlighting his love of woodworking. “It gets pretty addictive.”

Opener ‘Sharp Rocks’ starts well then kicks up a gear with a powerful wall of guitars, not overbearing and not overused though. ‘Cryin Shame’ follows as a quieter, melancholy foil for the more upbeat songs. ‘Mystic’ is another example of controlled power, the finishing touch being perfect backing vocals courtesy of Stephanie Woods. ‘Long Winter Rodeo,’ ‘Eastern Valley Sunset’ and ‘Denim Tears’ are all highlights but there is not a skippable track on the album. This is how it should be done.