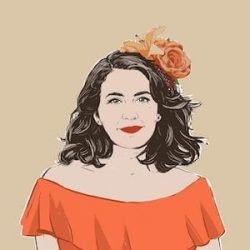 ‘Arrow,’ the second album from the Ciara O’Neill, a singer, songwriter and multi-instrumentalist from  Portadown, Northern Ireland really is quite a special record. There’s no doubting Ciara’s origins; her voice has that Celtic folk inflexion that is instantly recognisable and has a tendency to make the listener stare into space with wistful homesickness no matter if they haven’t set foot in Ireland, north or south.  The core folk tradition in which this album is rooted flowers in O’Neill’s songwriting with some quite brilliant arrangements where cello and violin often dominate and accentuate the impassioned lyrics.

This is an album of ten outstanding songs that work a rich vein of emotion. Love, loss, and loneliness are probed like a tongue that just can’t stop returning to the exposed nerve of a tooth because in an odd way it feels good. The first three songs ‘Arrow,’ ‘Hurtin’ and ‘Storms Comin’ lure the listener with gentle instrumentation, beautiful melodies and gorgeously double-tracked vocals, but those strings are always there, slightly menacingly. Ciara tells us in ‘Storms Comin’ that even as the dew drips gently from the leaves and the sun sets on a warm summer breeze she can hear the thunder roar  – the storms coming – and these contradictions underpin the whole album. ‘Do You Know’ opens with a gentle piano and this time the cello shrouds the refrain: “hello, no one can make it alone.” ‘Equal and Opposite’ works the notion of difference, that “one man’s trash is another man’s gold.” These songs of contradiction have a sadness that at the same time is uplifting. O’Neill herself describes the album as ‘Alternative folk noir’.

But it is more than folk noir: it is a triptych – three influences that come as one whole. The Irish influence is apparent – Dolores O’Riordan and Glen Hansard have been noted. But there is the ear for melody and intensity that can reach out to a larger audience. Anyone with an Amy MacDonald or Tom Mcrae record would feel at home in ‘Arrow.’ Finally there is a real Nashville influence, and indeed O’Neill has played in the legendary country town and with several Grammy-nominated country musicians. Some of ‘Arrow’ sits in Civil Wars territory. Try ‘Favourite Mistake’ as your taster for the album – mistake it is not. Coming together in ‘Arrow’ these parts make for a quite wonderful whole.