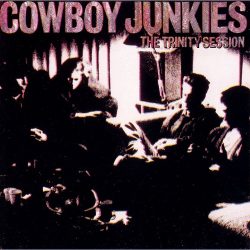 This is arguably the slowest album ever recorded. It is surely ironic, therefore, that it was recorded in (almost) a single session on 27th November 1987 with no mixing, overdubs or edits. The recording was made on a single Calrec Ambisonic Microphone in the Church of the Holy Trinity in Toronto. The church was picked for its natural reverb and the session was booked under The Timmins Family Singers for a Christmas special.

This was the album that got the Cowboy Junkies noticed. To have the confidence to lay down such minimal versions of covers and traditional songs as well as their own tracks left them nowhere to hide and the result is a head-turning combination of warmth, familiarity and intimacy.

If there could be any doubt about the quality of Margo Timmins’ vocal, the album opens with the a cappella ‘Mining For Gold’. All the smoky sultriness you could ever wish for in a voice is right there, with no disguise. You can also hear all the space around the microphone before the track even starts, which subtly informs the listener that this is not an ordinary album.

By the second song, they have found some instruments and amble into ‘Misguided Angel’, delicately led by the harmonica, blending a wonderfully sparse composition of wandering bass and the syncopated guitar of Michael Timmins. This is one of the standout songs on this record and it remains a favourite to this day.

‘Blue Moon Revisited (Song for Elvis)’ effectively reworks a classic, being at once expanded and new while remaining completely familiar. This song drenches the listener in the melancholic vocals and displays the heart of the album, combining the blend of original and cover version in their own inimitable style.

The cover versions of Hank Williams’ ‘I’m So Lonesome I Could Cry’ and Lou Reed’s ‘Sweet Jane’ sit equally comfortably together in this newly defined space, which is in itself quite remarkable. It is here that they nailed their sound – they took these songs and made them theirs, which is no easy task.

The album was released when country was country, there was no alt- about it, which left the conundrum of what exactly you were listening to. They took blues, country, folk, rock and jazz and slowed it right down and in the process they made something new. It is albums like this that began the ‘alternative’ description. This album was not necessarily cool, it simply exuded ‘we don’t care what you think, this is our thing’.

This recording is biased, it is skewed. It does not do all things well, they chose not to do so, and in doing so they achieved a timeless, unique sound. The ambience, combined with the vocal, gets as close to the definition of melancholy as you can go with no hint of self pity, but this is not a sad, lonely album – it is more suited to the early hours with intimate friends and reflective conversation.

For someone who grew up on a strict childhood diet of folk and Bob Dylan, this retook the space that eighties country had occupied by providing a stripped back feel that only included that which was necessary, therein forming part of the process that claimed a genre that we now know as Americana.