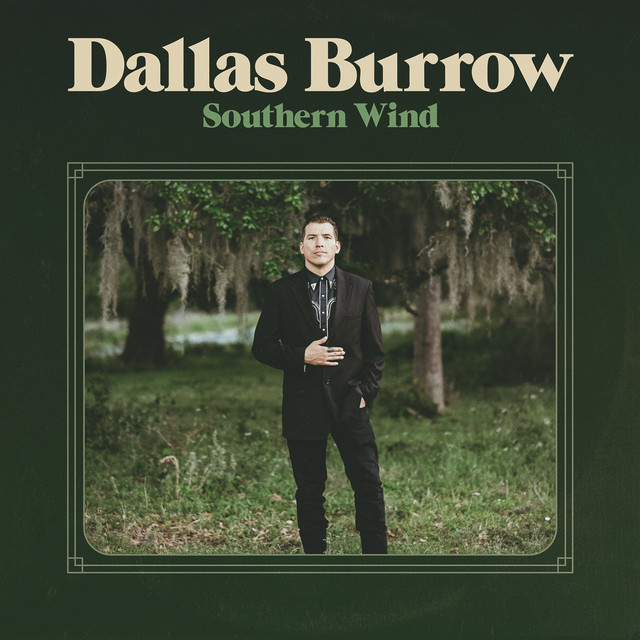 When you look at who Dallas Burrow is playing alongside on his debut album, you can only think that this album is going to be as career-defining as he hopes it will be. With names such as Pete Abbott of the Average White Band, Chris Scruggs, grandson of Earl Scruggs of Marty Stuart’s Fabulous Superlatives and Kenny Vaughan of the same legendary band, coupled with the Texan twang of Burrows’ guitar, you know that the album will be destined for greatness.

Burrow is a poet at heart, seen throughout his album, channelling his Texan routes alongside his travels across the free world into both his music and his song-writing. The album is the autobiographical tales of Burrow as an explorer before he finally bids farewell to his life as a young adult. But the album itself shows maturity, each song laden with clever rhymes (he’s not just a normal poet – an amazing one) and pieces of advice which we can all adhere to.

The title track and first single from the album, ‘Southern Wind’ is the start of this advice from Burrow. Telling us in his own magical way that everything is going to be alright, accompanied by a slow track. Even his humming is soothing and makes you feel at home: ‘Ride out the storm, let the sunshine in / Let all your troubles roll away with the Southern Wind’.

Burrows’ voice is an acquired taste. It is almost like he is not actually singing and it is more like he is just talking to you about what he’s seen. You can listen to the whole album and feel like you’ve heard a story due to his natural almost speech like tone. The voice of Sierra Ferrell is definitely needed as a great harmony to Burrows’, but don’t take that as a slight to his own.

While most of the songs are slow-paced, we do get a few fast-paced really fun songs. One of these is the song ‘Guitar Man’ in which he sings about exactly that. As the song chugs along, he tells us the power of a guitar and what it can do for you, and the power it can have to take you far away from your normal life into the fantasy world: “Strings are like a tonic, put that music in your veins. Slip into a song about making money robbing trains.” His later song ‘I Got to Ramble’ showcases this ‘guitar man’ in action, with an excellent solo.

Overall, this album is a phenomenal listen. You might think on first acquaintance that the album is boring, but listen again and you can’t help but be entranced by Burrows’ spoken-word style and sudden change into upbeat songs. This change from fast to slow and slow to fast is fully seen in ‘Rodeo’. He sums up all our lives in this track: “Life ain’t a race now, it’s more like a rodeo”. Burrows showcases an extremely powerful voice in this track, a sharp contrast to anything we have seen before, which could make the whole album even better if it appeared throughout.

The career-defining album that Burrow wanted

Nicki Bluhm might have invented a whole new genre of music with her latest solo album. Nicki Bluhm has been around for a while with her first solo album  coming out in 2008, since when […]

Interview: Rod Picott on his life’s mission to become the best songwriter he can

Interview: Blue Dogs’ Bobby Houck on combining being in a band with a professional career

Interview: 49 Winchester’s Isaac Gibson on the journey to their first major-label release

Something for the weekend: First Aid Kit “Angel”

Well that’s it from us for another week. If you’re an AUK supporter, your new playlist for the month will be landing in your inbox around 5pm today. If you’re not, come and join us! […]

An elegiac meditation on the death of a friend and bandmate. Martin Ruby’s new video for ‘Rusty Trucks and Daisies’ is a tribute to his late friend Molly.  As he laments in the back seat […]

Sierra Ferrell has been one of this summer’s hottest tickets. Her show at the excellent 300 capacity Future Yard venue in Birkenhead was sold out well in advance and by all accounts it was a […]