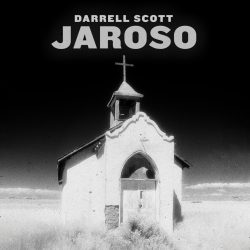 With a twenty-five year career as an accomplished session musician, songwriter and multi-instrumentalist, Darrell Scott returns, this time with an intimate live album. ‘Jaroso’ was recorded simply with a 4-track, in front of an audience. It was performed in an old church on the border between Colorado and New Mexico. Scott has written songs for Guy Clarke, Dixie Chicks, Faith Hill and many others, winning the AMA in 2007 with his song ‘Hank William’s Ghost‘, this time, he “played the songs that wanted to be there“.

Darrell Scott is the son of the late Wayne Scott (mentioned on the album) “we don’t have Merle Haggard, and we don’t have my dad anymore, but we have this song” he explains before a beautiful acoustic cover of ‘(Have you ever been down to) Colorado‘ the song by those as mentioned in the intro. Scott is a multi-instrumentalist who plays the piano, mandolin, guitar, accordion, pedal, lap steel and banjo, but equally, his voice is strong enough to stand alone as in the track ‘Fiddler Jones‘. This album is just one man and his guitar singing in a church, and while sometimes the guitar is a mandolin or banjo, it is just what it needs to be; Darrell Scott has the talent and skill to know what that is.

His career has followed him from Nashville to Boston and back again, and he tells tall tales of his travels. No story is more quirky and endearing than the ballad in ‘Hummingbird‘ a song about two boys who sank their father’s Gibson guitar trying to use it as a boat. The album is replete with personal tales and the warmth of a life well-lived.

The warm live sound on ‘Jaroso‘ is perfect and reminds us of what we are all missing in this time of no live concerts. The album ends, but fades back in with the small audience joining the choir, softly repeating “Colorado, I need healing from the sorrow I’ve been feeling” and dares the listener not to feel the same.

Darrell Scott plays the songs that wanted to be there