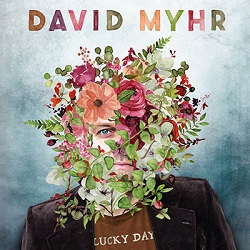 Not many albums cross our paths that are the product of research for a doctoral thesis – in fact ‘Lucky Day‘ may be the first such. David Myhr has been working for four years on researching the songwriting process – aiming to answer fundamental questions such a what makes a good song ? Why is one melody more attractive than another? Based on the mostly shared songwriting experience that makes up ‘Lucky Day‘ let’s hope that the written magnum opus is subtitled “songwriting in the musical style of 1971 to 1976“.  For what we have here is another of 2018’s albums throwing a nostalgic glance back to the post-1960s and pre-punk era. Well crafted songs, beautifully played recorded with clarity and crispness. With a reliance on light melodies and with a vocal not-dissimilar to McCartney’s baritenor, and layers of backup vocals and plenty of strings giving extra depth to the songs, it’s impossible not to think of ELO and especially Jeff Lynne, Paul McCartney both solo and in Wings, and Andrew Gold, who seems to be becoming a touchstone for these time-tunnelling albums.

What this means is that ‘Lucky Day‘ is full of catchy songs, with nice turns of lyrical phrase. Opener ‘Jealous Sun‘ works on the idea that moonlight is enough for most people, but those who fly towards, and into, the brighter light of the sun may get their wings singed. ‘My negative friend‘ is all jazzy chords and big drums as Myhr wags a disparaging finger at someone who’s wasting their short span of life “I just think that it’s enough with the whinging / you should be smiling (I used to feel just the same) / there’s no more time for complaining“.  There’s no real room for truly downbeat emotions though, even ‘Every day it rains‘ offsets the negativity of genuine problems by claiming that “sometimes it feel like there’s nothing you can do / everyday it rains…just until the sun shines through“. The CD release of ‘Lucky Day‘ comes with four bonus tracks which offer further evidence of David Myhr’s main inspirers – there’s a cover of Graham Nash’s ‘Military Madness‘ which certainly adds a polished sheen but also, unsurprisingly by now, replaces Nash in full-on protest-singer mode with a sweeter vocal.

If you currently have too few McCartney or ELO albums, David Myhr offers one to file alongside them.