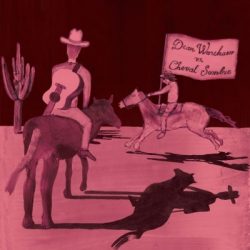 Dean Wareham (Galaxie 500/Luna) and one man band Cheval Sombre (Chris Porpora) combine for an album they self describe as ‘Western Dreampop’. What they have brought together is a selection of tracks drawn directly or inspired by vintage C&W films, with much more western than country. Wareham states “I am quite sure it is not alt-country. Frankly I don’t really care for bands trying to do authentic Americana.” This is certainly a novel venture, with Wareham and Porpora alternating choices and vocals to mixed effect.

The fragile voice of Dean Wareham suited the atmospheres of Galaxie 500 slowcore perfectly, but here it just sounds weak. Chris Porpora’s voice is murky. His attempt at Bob Dylan’s beautiful ‘Tomorrow Is A Long Time’ ends up sheltered by chorals. (Check out Elvis Presley’s gorgeous cover of this track to see how it should be done). On Blaze Foley’s ‘If I Could Only Fly,’  his voice is essentially a mumble. (It’s the Merle Haggard version of this that is essential). This track, though, is rescued by some sumptuous guitar work and band arrangements, reemphasising the sorrow.

It’s the musicianship throughout that provides the merits here, especially on traditional bar-tune, ‘Alberta’. The nadir of the album though comes with ‘Wand’rin’ Star’. Somehow a No.1 hit in 1970 (and responsible for stopping ‘Let It Be’ at No.2) when Lee Marvin growled it from Paint Your Wagon, this slight, irritating dirge is dragged out over 5 minutes on this album, adding nothing. Which is really the issue throughout. If you’re going to do a covers album and don’t better the originals, you at least have to offer something interesting. If you can’t, it’s essentially pointless.