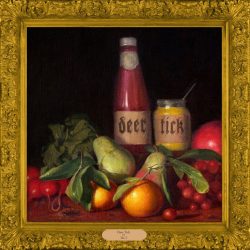 In what is a slightly unusual move, Deer Tick have simultaneously released two albums of contrasting styles, their first for four years. Whilst being massively diverse in sound, both records actually do sit together very well to offer a full insight into a band in full creative flow. Volume 1 is acoustic with some folk edges and opens with a full-on John McCauley vocal on Sea of Clouds that certainly shakes the listener out of any preconceptions that this may be the “quieter” of the two albums. It’s an outstanding track and one that sets the tone for a varied set of songs that include vital contributions from guitarist Ian O’Neil with Hope is Big and drummer Dennis Ryan with Me and My Man. The lyrics of Doomed From The Start evidence a certain disillusionment with society but the gentle sentiment of It’s Only Love (“don’t be afraid, it will let you down but not today”) is simple but striking. The late-night bar-room blues of Cocktail, a catalogue of drunken days, is a lighter moment while the sublime sax of Limp Right Back is a highlight of Volume 1 and a fine contrast to the attack that is to come.

Volume 2 bursts into life with Don’t Hurt and the power-pop of Jumpstarting and straight away we’re into the territory of a heavier guitar attack. Look How Clean I Am mixes wry lyrics with sneering vocals and brings to mind the Drive By Truckers’ Dead Drunk and Naked as a chronicle of desperation. It’s a Whale is a raucous, punk style track while Tiny Fortunes is one of the standout tracks from either album. S.M.F (Shitty Music Festival) will doubtless bring back happy memories for many listeners while the roaring Mr Nothing Gets Worse is a suitably sardonic ending.

Two records, different yet similar; you may want to choose a favourite or simply enjoy the range of sounds. Either way, an outstanding pair of albums.