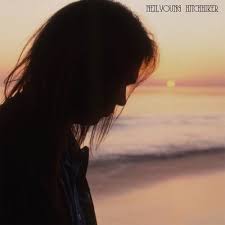 This is truly lost treasure indeed. In the midst of a purple patch (that most artists never see) in the year 1976 Neil Young went into the studio with his drug buddy producer David Briggs. They took with them some dope, some coke, some new songs and sense of artistry that perhaps has disappeared in the interim. With the simple question “Are you ready Briggs?” Young launches into a single night’s recording wherein he laid down 10, in any language, classic tracks.

Most have emerged in the interim but as a whole this represents a vein of true creativity laid bare by the live production and sparse setting. Maybe it is the true coda to the doom trilogy. A caustic, acoustic cry of pain in the dark with tunes to die for.

Of the well-known tracks, the formative ‘Powderfinger’ stands stark and moving shorn of its shrieking lead guitar motif, ‘Captain Kennedy’ benefits from being surrounded by the mood of a whole piece of work and leads into one of the three unreleased tracks ‘Hawaii’. A brief track but full of the melancholy of Neil’s best work as is the following ‘Give Me Strength’ with its beautiful harmonica. Stylistically this is side one of ‘Rust Never Sleeps’ without the added production and indeed features two of the tracks that emerged on that disc.

This album is a snapshot of songs maturing and in the case of the title track even includes lyrics that ended up in other songs. Have a listen and work it out. It’s essential for fans and a great introduction for the curious.

A piece of 1976 preserved in amber. A sense of yearning in aspic.