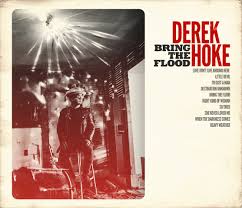 Derek Hoke is a singer-songwriter based in East Nashville but this is not a straightforward Nashville album. A commentary on the dark times he feels are engulfing the States, it was nurtured from fleeting thoughts recorded with a tape-recorder whilst driving at night on the Tenessee blacktop to full album status with the assistance of several friends including the likes of Aaron Lee Tasjan to name but one.

A vague country rock feel permeates the disc but their are some quite gorgeous moments that grab the listener. The strings on ‘I’m Just A Man’ are delicious and really heighten its dense hothouse feel. ‘Destination Unknown’ has some lovely organ supporting the vocals and colouring in the corners of a mournful keening lyric, the title track has some needle sharp lead guitar ‘Right Kind of Woman’ nods to both Dylan and Chris Isaak.

An earworm is the Motown/Stax inspired ‘So Tired’, again with insistent organ reminding of The Staples Singers and the chorus adding to the sense of place and time. A great little tune with another sparkling guitar break.

A grower of an album as Hoke’s often reverb-soaked guitar gets into the head. Certainly worth investigating.

Dark visions of a country descending into madness with some great tunes too!